The Karni Mata Temple or the Rat Temple of Rajasthan is situated 30 kms away from the Bikaner city and is dedicated to Karni Mata, a famous mystic of her times, believed to be an incarnation of goddess Durga. The construction of the temple was completed in mughal style, in the early 20th century by Maharaja Ganga Singh. The temple was further adorned by Kundanlal Verma of Hyderabad-based Karni Jewelers in 1999. The silver gates of the temple and the marble carvings were also donated by him.

The Karni Mata temple is also known as the Rat temple and is named after a woman, who was the seventh daughter of Mehoji Charan and Deval Devi and born in the 14th century in the Suwap village of Jodhpur district of Rajasthan.

She was an incarnation of Durga, the goddess of power and victory. She lived an abstemious life, and most of the temples dedicated to her were dedicated during her lifetime.

She is an official deity of the royal family of Bikaner and Jodhpur. During her lifetime she performed many miracles and also laid the foundation stone of two of the important forts in Rajputana.

She led her whole life to help all the needy peoples, attracted and followed by a huge number of devotees.

This beautifully architectured temple with immense historic significance is attracted by a large number of tourists.

This temple is quite famous for a large number of black rats running around the temple complex fearlessly. It is believed that the souls of dead Charans (traditional bards, the devotees of Mata) reside in these rats. It is considered very lucky to spot a rat in the temple.

During the time of aarti, these rats are offered sweets, grains, etc by the devotees. Besides of all thousands of black rats in the temple, there are a few white rats, which are considered to be especially holy.

They are believed to be the manifestations of Karni Mata herself and her four sons. Sighting them is a special blessing and visitors put in extensive efforts to bring them forth, offering prasad a sweet holy food.

These rats are also known as Kabas. These are harmless and play around in the temple without disturbing the devotees. Rather they sit on devotees’ laps, shoulders, hands, and head which the devotees think to be of divine spirit and blessings of the Goddess.

During these seasons the number of devotees visiting the temple increases than usual. This is worth a visit place in Deshnok and around Bikaner city.

Karni Mata Temple Location- The famous temple of Mata Karni is just 610 m away from Deshnok railway station and about 30.5 km from Bikaner Airport, making it easy for the visitor to reach the destination.

Karni Mata temple is well connected to Bikaner city with NH 89. Tourists can hire private conveyance such as auto rickshaw, rickshaw, Cab, taxi to reach the temple of the ancient era.

Karni Mata Temple Timings- Devotees can visit any time from dawn to dusk. 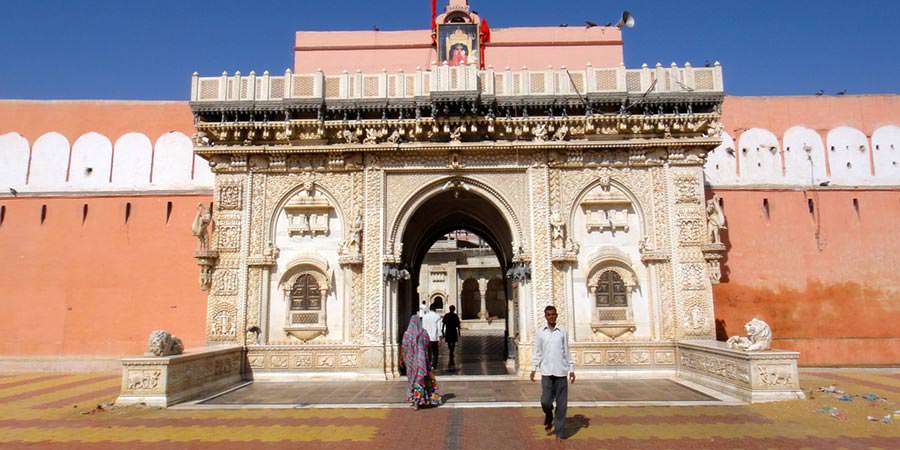 The Rat Temple of Rajasthan