Listed as one of the UNESCO’s World Heritage Sites in Rajasthan, the Chittorgarh Fort also known as Chittor Fort is witness to the bravery of Men and Women of the Rajput dynasty. It is spread over an area of 280 Hectares, on a hill 180 meters high. It is said that the fort was built by the Mauryans in the 7th Century AD. This fort is a fine piece of the great ancient artwork which can surprise you with its first look here. The artwork on the pillars here is so beautiful and fine, it is said that it used to take around 10 years just to script the fine artwork on one pillar. Chittorgarh Fort is the largest fort in India. The fort has a long story of romance, courage, determination and sacrifice. A glimpse of the fort still makes one to think the glory of the Rajputs who once lived here.

It is believed that the fort was initially built by the Mauryans in 7th Century AD as inscribed on the coins of that period.

There are also many records which depict that the Mewar ruled the fort for about 834 years. Bappa Rawal established the fort in 724 AD after which the fort has seen a number of battles and rulers.

It was attacked about 3 times by famous rulers but with their bravery, Rajput rulers saved the fort every time. In 1303 the fort was attacked by the Allaudin Khilji who wanted to capture Rani Padmini, who was said to be amazingly beautiful.

He wanted her to come with him and when she refused, Allaudin Khilji attacked the fort and defeated the ruler.

Second-time Bahadur Shah, the king of Gujarat sacked the fort. And Akbar, the Mughal Emperor attacked the fort in 1567, who wanted to capture Maharana Udai Singh.

In 1616 Jehangir, a Mughal Emperor returned the fort to Maharana Amar Singh, who was the chief of Mewar at that time.

The Chittorgarh Fort boasts of having 84 water reservoirs within its campus in the past, only 22 of which are left remaining today.

These 84 water bodies were said to hold so much water that could meet the needs of 50,000 soldiers of the kingdom for 4 consecutive years. Now you can just imagine the majestic of this place.

Chittorgarh Fort also consists of a number of holy temples, holy Stambhas (Towers) and 7 gates so high that enemies could not see or attack inside the fort, by even standing on an elephant or a camel. Around 100,000 inhabitants used to live within its campus in the past times; even today the count is around 25,000.

The monumental ruins of this place have inspired the tourists and writers from numerous countries.

The largest fort of India also invites and welcomes you to visit and explore its beauty and royalty.

Vijay Stambh Chittorgarh – Also known by the name of Tower of Victory, the Vijay Stambha was erected by Rana Kumbha to celebrate the victory over Mahmud Shah I Khalji.

The tower is now illuminated in the evening and offers a stunning view of the Chittor city.

Kirti Stambha is dedicated to Adinath, who was the first and most famous Jain tirthankar.

Rana Kumbha Palace -This palace is located near the Vijay Stambha and is one of the oldest structure of the Fort. Maharana Udai Singh who was the founder of Udaipur was born here.

The entry to the palace is through Suraj Pol. The palace features beautiful carvings and sculptures.

Padmini Palace Chittorgarh – It is a 3 storied white building located at the southern part of the fort. The palace is adorned by the pavilions at the top and surrounded by water moats.

The architecture of this palace become the example for many other notable structures which were surrounded by the water.

The Chittorgarh Sound and Light Show was started by the Tourism Department of Rajasthan so that tourist can know about the history of the fort.

The show is produced by ITDC which is run by the RTDC. The Sound and Light Show is about 58 minutes’ duration, in both English and Hindi, with the blend of beautiful Rajasthani Music.

How to Reach to Chittorgarh Fort

The nearest airport to the Chittorgarh Fort is in Udaipur Airport, which is just 70Kms away from Chittorgarh and well linked by daily air services from Delhi, Mumbai, Ajmer, Ahmadabad etc.

Taxis from Udaipur charge around Rs 2500 to the fort. State-owned and private buses are much cheaper and can be hailed from the Udaipur Bus Terminus.

Auto Rickshaw: From the Bus Stand/Railway Station or foothills of the Chittorgargh, there are auto rickshaws available to the top of the hill. Auto rickshaws for a full tour of the fort town can be hailed.

They charge around Rs 300 to 500. Since it is not possible to walk around the fort on foot the best option is to hire the auto rickshaws. There are no separate night fares for auto rickshaws. 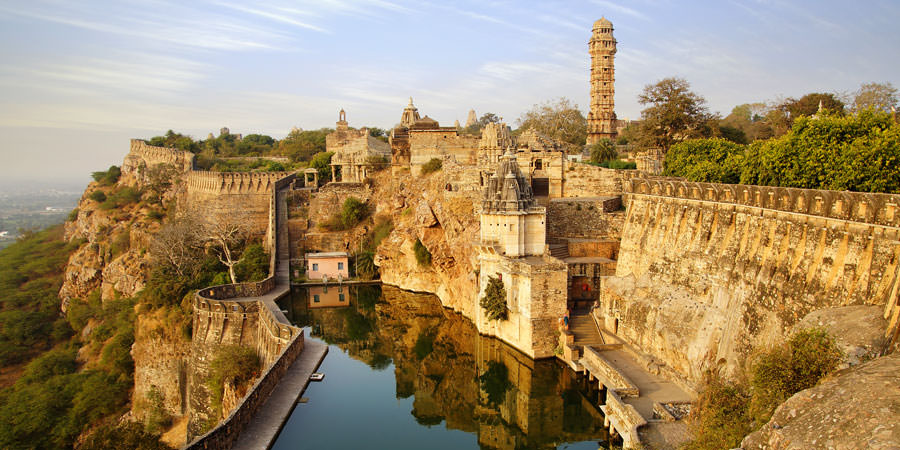 One Response to “Chittorgarh Fort”

this site is very good can do project .thank you