Deeg Palace in Bharatpur used to be the summer resort of Bharatpur Kings. Built-in 1772 by King Suraj Mal, Deeg Palace is built with a blend of Rajput and Mughal architecture. The design of the gardens has been inspired by the Mughal Charbagh. The palace forms a quadrangle with a garden and walkways at its center. Decorative flowerbeds, shrubs, trees, and fountains cool the place considerably during summer. It is one of the famous tourist destinations in Bharatpur.

The layout of Deeg gardens is based on the formality of the Mughal Char bagh or fourfold garden patterns and flanked by two reservoirs called namely Rup Sagar and Gopal Sagar.

The architecture is primarily of trabeate order, but the use of the arcuate system has also been made in certain instances. Mostly the arcades are of a decorative quality as each arch is formed by joining spandrel shaped slab cantilevers projecting from the pillars.

Agra Airport is the nearest airport while the nearest railway station to the palace is Bharatpur Junction.

Deeg is four hours by road from Delhi, two hours from Agra and one hour from Mathura. 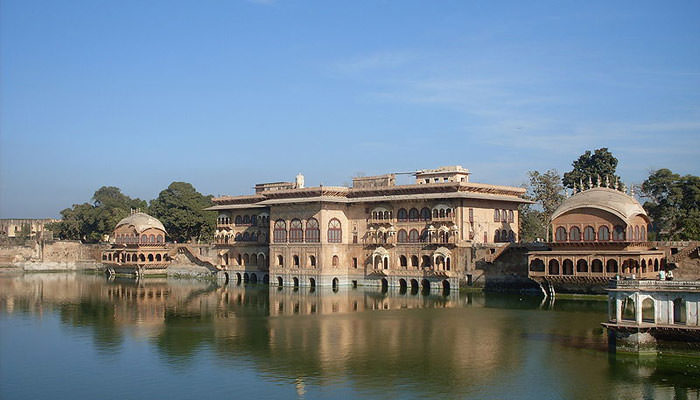