Juna Mahal in Dungarpur is a seven-storied building with the architectural design of a fort was constructed during the 13th century. The walls are adorned with mirrors and glassworks. Tourists can also see several picturesque miniature paintings and frescoes on the interiors of the palace. The place has turrets, corridors, and a narrow entrance. Located in the foothills of Dhanmata hillock, this 700-year-old palace also known as 'Bada Mahal' or 'Purana Mahal'.

With a two-story basement out of seven stories, it was constructed on a high platform with Dawra stone. This palace has one staircase which is connected to all wings of the palace.

Its entrance Rampol with Tripoli gate attracts tourists in large numbers. Juna Mahal is famous de to the use of local Parewa stone in its construction. Pare was stone windows with detailed hand-worked pane looks very beautiful.

Marwari styled glass and wall paintings and glass pieces arrangement with color paintings is marvelous. Its mesmerizing paintings along with the mature Rajput style of architecture attract everyone’s eyes.

Rawal Veer Singh Deo started its construction in Vikram Samvat (Hindu Calender) in 1939 on Kartik Shukla Ekadashi. His son Rawal Bhuchand, realized its importance and transferred the capital of Dungarpur to this palace. But its construction completed in the 18th century.

How To Reach Juna Mahal, Dungarpur

By Road: Juna Mahal is located on the southern part in Dungarpur city. One can easily reach here by bus or taxi.

By Air: Juna Mahal can be reached through nearest Udaipur Airport (132 km) which is well connected with regular domestic flights to Delhi, Kolkata, Mumbai, Ahmedabad, Jodhpur, and Jaipur. 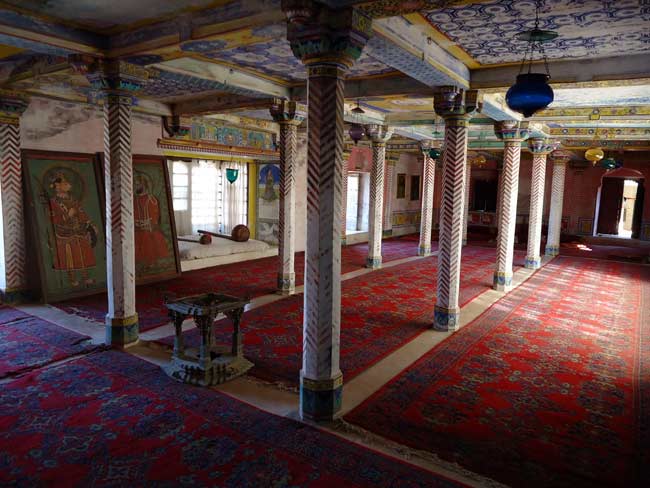