Lake Pichola in Udaipur is an artificial lake that was built in 1362 AD. It is located in the heart of the Udaipur city and is the oldest and one of the largest Lakes of Udaipur. The lake has a surface area of 696 hectares, and its maximum depth is 8.5 m. It is named after the neighbor village Pichola. It is one of the most famous attractions in Udaipur City. Boating facilities are available to explore the islands in the lake. Boating in Pichola Lake is the best way to explore the lake and its area. There are four islands on the lake namely- Jag Niwas, Jag Mandir, Mohan mandir and Arsi Vilas. The most beautiful and eye-catching are the Jag Mandir, a renowned lake Palace and Jag Mandir, also known as Lake Garden Palace was conceptualized buy Maharana Jag Singh. These beautiful Palaces of the olden days, richly architectures heritage adds to the beauty of the Lake. The City Palace, located on the east bank of the Pichola lake and surrounded by many historic temples, mansions and a number of bathing ghats, adorns the Pichola Lake.

One major attraction of the lake is the incredible view of the sunset from here during this time the sky looks like a canvas splashed with spectacular colors. Bird watchers can also have a gimps of many different species of birds like tufted ducks, coots, egrets, terns, cormorants and kingfishers near the Arsi Vilas.

In the vicinity of the lake, travelers can also see the Natini Chabutra, a raised platform, built in honor of a tightrope walker ‘Natini’ commemorating the legend around her and her curse.

Intiallly it was built by Pichhu Banjara, a gypsy “Banjara” tribesman who transported grain, during the reign of Maharana Lakha with the backdrop of green hills. Later Maharana Udai Singh established the beautiful city of Udaipur on the bank of this Lake and constructed a dam in the Badipol region to meet the drinking water and irrigation needs of the city and also to enlarge the Lake.

Prince Khurram who rebelled against Jahangir, sought refuge of the Mewar King Maharana Karan Singh II in 1623 and was housed in the partially completed Jag Mandir. Prince Khurram later usurped the Mughal Empire, took the title of Shah Jahan.

A visit to Udaipur is incomplete without a boat ride in Pichola Lake. Boating is the best way to explore the area of the lake. There are number of boating facilities available here.

You can hire simple and regular boats which costs you on per hour basis while there are also charter boats which offers luxurious ways to explore the lake with some entertainment. Sunset Boating facility is also available.

How to Reach Pichola Lake

The Pichola lake is about 23.6 km from Maharana Pratap Airport, Udaipur and just 2.4 km from Udaipur railway station. Tourists can hire hire tongas, taxis, and auto-rickshaws to reach the lake. 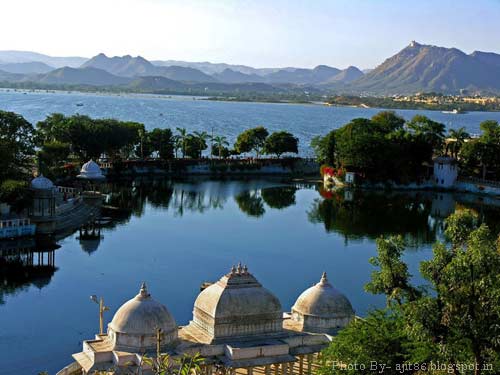