Welcome to the 1855 Indian train holding Guinness Book of record for having the oldest operational locomotive. Run as a luxury tourist train, Fairy Queen tour between Delhi and Alwar. Running majestically on an oldest steam engine, Fairy Queen also won the National Tourism award and after resting in National Rail Museum for 25 years, it regains its allurance and serving Indian tourism now.

Fairy Queen only operates with two royal coaches with all modern facilities. The first coach contains fifty seats and the second coach is used as a pantry car.

Additional lounge in front of the carriage provides a better view of the old engine. Fairy is fully AC with all the necessary facilities.

Fairy Queen Train was built in 1855 in Leeds, England. After taken to Calcutta, it was named Fairy Queen. East India Company used to run it only between Howrah and Ranigank in Calcutta only but later in Bihar it runs till 1909.

After 34 years in Calcutta’s Howrah railway station, it also serves Chandausi’s railway zonal training school between 1943 to 1972. In 1972 Indian Government declared it as a heritage and National treasure and placed it in National Rail Museum in New Delhi.

On 1st February 1997, Fairy Queen express made its first journey as a tourist train between New Delhi and NCR passing Sariska Tiger Reserve in Alwar.

The first coach of Fairy Queen is fully air-conditioned with all basic facilities and at night Hotel Sariska Palace organizes various cultural programs during the stay.

Guest also get the privilege of jeep safari at Sariska Wildlife Sanctuary in Rajasthan.

Note: “In case of failure of Steam Loco at the moment or enroute,the journey will be completed using Diesel Loco”

Fairy queen would be running as per the following schedule –

The Fairy Queen leaves Delhi Cantonment Railway station on every 2nd and 4th Saturday of the months between October to March.

During rest of the year it is halted for engine and coaches renovation and also because of hot summer.

The train starts its journey on every 2nd and 4th Saturday, in the months of October to March from Delhi Cantonment Railway station.

Fairy Queen Stoppages: The train will stop for 10 minutes each at Garhi Harasuru, Pataudi Road, Rewari, Ajarka and Khairthal railway stations in both directions for water & other requirements of the locomotive.

The itinerary of Fairy Queen includes 1Night/2 Days of a momentous journey. In this period you visit the beautiful city of Alwar, and the world famous Sariska Wildlife Sanctuary. 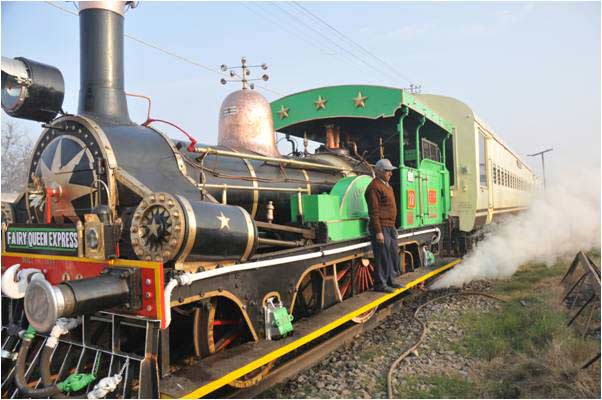 i want to book tickets..please let me know how to do

How to book tickets for fairy queen train?

i want to buy 4 tickets for my family which includes 3 adults and one child.

we want to go to alwar by this train in December . How should we book the ticket.

Need to book 5 tickets for the month of August. Kindly provide the booking link and required info

Hello, may I ask, how do. I make. Booking for One way from. Alwar to. Delhi?
And what are the dates of delartures in March 2019?

Want to book the package in fairy queen

We would like to book tickets in Fairy Queen with Full Package for details mentioned below:

I request you to please provide the details how to book? And share the link for online booking if possible.

We would like to book 2 tickets for Fairy Queen train ride in 27th December 2018. Please reply to kp.singh@fastfox.com with details. Thank you.

We would like to book 2 tickets for Fairy Queen train ride in December of 2018. Please reply to vb_shah@yahoo.com with details. Thank you.

hi!! i wish to book the train ride for 2 people. can some official please send the link to make the bookings. thanks!!

sir i need a booking in fairy queen train in december ,pls let me know how to do it.
thanks

How to book a ticket? Not able to search for a direct link. Pls support.