Jaipur Wax Museum at Nahargarh Fort, a new feather added in the crown of Department of Archaeology & Museums The Nahargarh Fort, is the city’s defense fortress built at the highest point of the Aravallis, is an 18th-century Indian-European architectural marvel that still stands strong and gives panoramic views of the city of Jaipur. The Jaipur Wax Museum is immortalized at this iconic Nahargarh Fort in the association with the Department of Archaeology & Museums, Government of Rajasthan. The Museum showcases wax and silicon statues of the personalities who have not only given the best to their own fields but also have been iconic for the society. The unique feature of the statues is the liveliness of the sculpted image. A background has been given to each statue to support and complement to its celebrated history. This feature has made it one-of-its-kind Museum and this enhances the wax figure and makes it feel larger than life.

The museum is the brain child of Mr. Anoop Srivastava of Entertainment 7 Ventures Pvt. Ltd. who laid the intellectual foundation for this project with the Pink City Film Festival in 2006. A lifelike wax sculpture of the legendary Bollywood actor Amitabh Bachchan was unveiled at this event.

Encouraged by the response and armed with the dream of creating a one-of-its-kind museum, Mr. Srivastava teamed with several other like-minded people including sculptor Susanta Ray.

A skilled team of technicians, designers etc. restored the fort and the interiors were adapted to create an attraction that would add yet another crown jewel to Rajasthan Tourism. Several days of ingenious restoration, 32 wax exhibits – each installed with a unique set and a skillfully polished fortress later, the museum is here to enthrall its visitors.

Sheesh Mahal : The walls and pillars of the Sheesh Mahal has been revamped and studded with high quality inlay mirrors to replicate the opulence of the royal court from the times of Rajputana Dynasty. Here, one can experience the rich and varied heritage of the royal era.

The uniquely revamped and developed formation of Sheesh Mahal has been set to give the spectators the first hand experience of the Rajputana culture. Staged at the center, there one can get self clicked dressed in the royal designer attire which has been exclusively designed by the creative team of Jaipur Wax Museum.

The Sheesh Mahal also accommodates a changing room which is a splendor in itself. Sheesh Mahal, which is an extension of the spectacular Jaipur Wax Museum is a must see, one of its own kinds, reminding one and all, of the ancient years ‘Sheesh Mahal’, which was built by Maharaja Man Singh in the 16th century, leaving the patrons visiting the same with an ‘Awe-Struck’ Moment.

Royal Darbar : Royal Darbar seems like nothing less than a grandeur is a sneak peek into the royal era of Rajputana Dynasty. The structure stands adjoining to the main Hall of Icon. The Royal Darbar holds in itself the timeless fables of the golden era and takes one on to a royal journey.

Right from the entrance till the end, the hall which once served as the rest house of soldiers is cladded with the enchanted paintings that depicts the rich heritage of Rajputana Dynasty. The area is divided into 2 gallerias that have been hand painted with pure gold and motifs, all inspired from the history.

The area holds handmade paintings and wax statues of the eminent rulers who have helped establish a great kingdom and eventually a great dynasty. The area has been innovatively turned into a gallery where people can enjoy a walk through the past. Here, one can experience the glorious yesteryear of India’s biggest and richest heritage in its purest form.

The Hall of Icons : The Hall of Icons exhibits wax & silicon statues of the World known personalities– each exhibit is complete with a detailed unique backdrop or intricately designed sets.

The Royal Darbar, this grand courtroom displays statues of Rajasthan’s royal lineage of Maharajas and Maharanis in traditional costumes. Visitors are also welcome to enjoy other features like traditional paintings, antique artifacts, a royal buggy and interactive statues. 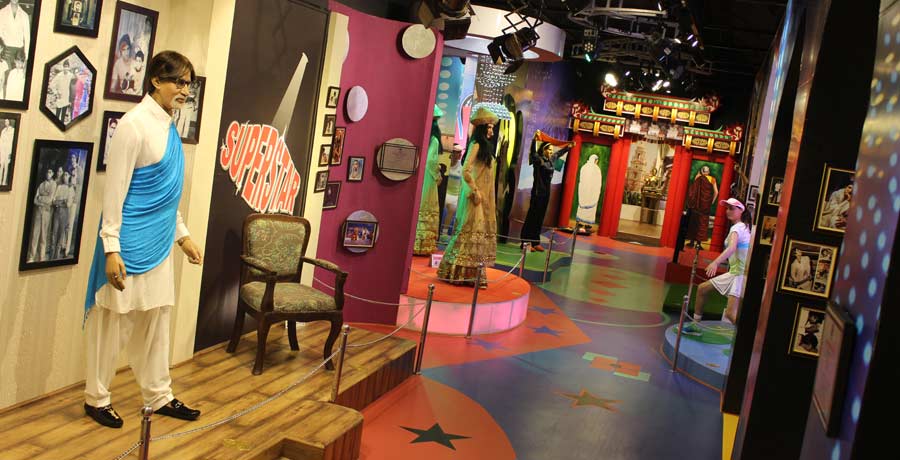