The Fort of Nahargarh in Jaipur is also a creation of Sawai Raja Jai Singh. Nahargarh Fort stands on the edge of the Aravali Hills, overlooking the pink city of Jaipur in the Indian state of Rajasthan. The view of the city from the fort is breath-taking. The interesting part of the fort is the Madhavendra Bhawan, or the Zenana or female rooms are the most extraordinary place in the Nahargarh Fort. Each of these sections of the fort is radiantly best part of the Rajputana architecture and their taste for luxurious life. The nine wives of the king has got separate section that was two stories high. The queen’s quarter occupied the three sides of the rectangular courtyard while the fourth side had the king's apartment.

Nahargarh Fort is the first fort that was built by Sawai Raja Jai Singh and along with the Amber Fort and Jaigarh Fort it was meant to make Amer completely secure from any kind of foreign aggression.

Maharaja Sawai Jai Singh II, the founder of Jaipur, the fort was constructed as a place of retreat on the summit of the ridge above the city.

Walls extended over the surrounding hills, forming fortifications that connected this fort to Jaigarh, the fort above the old capital of Amber.

There are many stories associated with this fort as the local people think that the devastated soul of Nahar Singh Bhoomia haunted the place and obstructed the construction of the fort and harassed the workers of the work while construction.

Nahar’s spirit was calmed by building a temple in his memory within the fort, after which the fort became known by his name.

A wide variety of bird species is also found in the park. This place is an exclusive spot for the children to visit for Biological Park as it is the ideal destination for a family visit.

The fort was used by the king as a hunting retreat. It was also used by the queens as a breakaway palace from the daily royal lives. 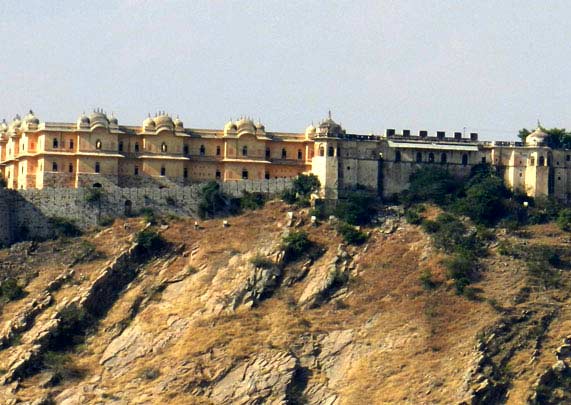