Charbhuja mean 'four arms' i.e Lord Vishnu of Hindu's. Charbhuja Temple is of lord Vishnu which was built by Shri Gang Dev who received divine instructions from lord Vishnu in his dreams. Believing in his dream, Gang dev recovered an 85 centimeters high idol of Shri Charbhuja Ji. It was also believed that more than 125 battles were fought to protect this temple and many times it was submerged in water for its protection. Pandava also worshiped this Shri Charbhuja idol.

Shri Charbhuja temple was constructed near the Gomati river in 1444 A.D. Temple is also known for its unmatched architecture with magnificent mirror work inside the temple. White marble, lime mortar, and mirror are used as the construction material for this temple.

Its gold inside shutters and silver outside shutter attracts with stone elephant which are placed on both sides of the entrance in the temple. Garud Ji idol is also situated in the courtyard. 85 cm idol of Shri Charbhuja Ji has four arms which are holding a conch, discus, mace and a lotus flower each.

Inscription in the temple tells about the village name Badri, so the idol also known as Badrinath.

A large fair is held in Shri Charbhuja temple every year on Bhadrapad Ekadashi i.e. Jhaljhoolani Ekadashi. As this idol is considered a miraculous one, thousands of pilgrims visit it every year.

Jhaljhoolani Ekadashi falls on the eleventh day of the bright fortnight of Bhadrapad month of Hindu’s i.e August-September. Pilgrims take part in a great procession and people welcome them with perfume and flowers.

In accordance with Vaishnava sect customs. Every day five times the temple is opened and devotees may have the darshan

Charbhuja Temple is located in the village Garhbor of Rajsamand district. Garhbor drive its neme from the fort made by Bor Rajputs. Garh means fort in hindi lang.

It is situated at a distance of 38 km from district headquarters Rajsamand and 103 km north of Udaipur. 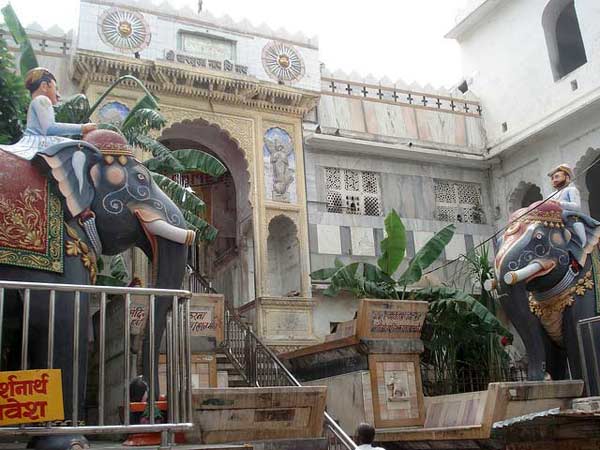 One Response to “Charbhuja Temple Garhbor”