Dilwara Jain Temple are one of the world most beautiful and sacred pilgrimage of Jains in the world. Located just 2.5 km from Mount Abu, Rajasthan, Dilwara temples justifies the beauty of Mount Abu also as the only hill station of Rajasthan. Dilwara temples are known to have excellent architecture and incredible work of marble carvings. Some experts even think that Dilwara temples have better architecture than the Taj Mahal.

Built-in between the 11th and 13th centuries AD by Chalukya dynasty, Dilwara Jain temples are simple and general looks from outside but its extravagant doors of entrance tell about its architectural superiority. It is surrounded by green hills and a temple complex by high walls.

All of its ceilings, doorways, pillars, and panels have minutely carved ornamental details which show its architectural uniqueness. It is also important to notice that at that time there was no convenience to transport such big blocks of marble at a 1200 meters height.

Elephants were used to transports marble on their back from Arasoori hills at Ambaji to Mount Abu.

Shri Mahaveer Swami Temple – This Jain temple is devoted to Lord Mahaveer the 24th Tirthankara of Jain’s. It was built in 1582. This is a small temple relative to other Jain temples.

Its walls have marvelous work of craftsmanship of Sirohi painted pictures of the porch. This fabulous work was done in 1764.

Shri AdiNath Temple or Vimal Vasahi Temple – This is the oldest temple among all other temples in the complex and dedicated to first Jain Tirthankara Shri Adinath Ji. It was built by Vimal Shah, Minister of Solanika ruler of Gujarat in 1031 A.D. Inside of the temple there are small images of Jain saints which have exclusive work of minute art carving on marble.

Outside of the temple, there is an open courtyard surrounded by corridors all beautifully decorated with marble carved stones. “Guda Mandapa” which is a hall decorated with numerous images of Shri Adi Nath, is another attraction in this temple.

This temple is known as Pittalhari/Peethalhar temple because ‘Pittal’ (Brass Metal) used in the construction of most statues in this temple. It also has Gudu Mandapa and Navchowki.

Shri Nemi Nath Ji Temple or Luna Vasahi Temple – This temple is dedicated to the 22nd saint of Jainism – Shri Nemi Nathji. It was constructed by two brothers known as Tejpal and Vastupal in 1230 A.D.

Black marble idol of Shri Nemi NathJi among 360 minutely crafted tiny idols of Jain trithankar in a hall named Rag Mandapa is amazing to see. The pillars of this temple were built by Maharana Kumbha of Mewar.

Location Of Dilwara Temple : Dilwara temples can be easily accessible through road from Mount Abu(2.5 km). It is located in Sirohi district, Rajasthan.

It is well connected to Jodhpur (264 km) through Sirohi and Pali by Abu road. The nearest railway station is Abu Road 29 km away and the nearest airport is Udaipur (185 km) . 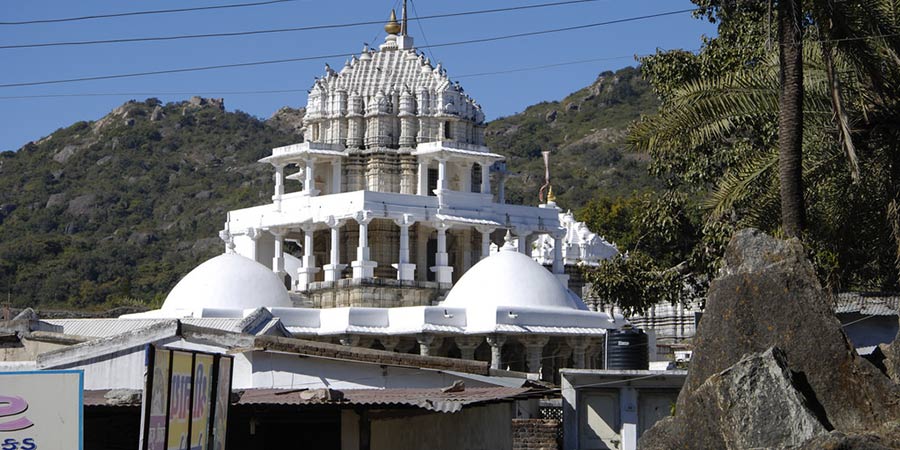