Sirohi District is a district in the southern Rajasthan in western India. The Sirohi City is the district headquarters and formerly was the capital of the princely state Sirohi and was ruled by Deora Rajputs. This district is comprised of 6 tehsils namely- aburoad, sheoganj, reodar, pindwara and sirohi itself.

Sirohi is also known as the Dev Nagri due to the large numer of temples in the city.

Sirohi district is located in South Rajasthan. Its neighbors are Udaipur in the east, Banaskantha District (Gujarat) in the south, Pali in the north-east and Jelore in the west.

The climate of Sirohi varies to an great extent. During the summer tempreture reaches upto 42°C while in winter it goes down to 0 °C. In the winter season the tempreture maximum upto 20°C.

Sirohi is well connected by road and railways. many trains are there from Sirohi town, Abu railway station, which connects sirohi with rest of Rajasthan and India as well. Regular government and private buses are available to other major cities. The airport at Udaipur is the nearest o the district, almost 110 km. This airport is served by a good number of flights from Jaipur and other cities. 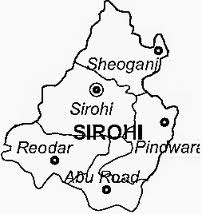