The Eklingji Temple, one of the popular pilgrimage of Rajasthan is located at a distance of 22 km away from Udaipur. It was initially built by Bappa Rawal, the then King Udaipur, on the side of 72 rooms Jain temple which housed a four-faced statue of Adinath, the first Jain saint. This ancient temple with great historic significance is dedicated to Lord Ekalingji, the patron deity of the Mewar clan. Ek means 'one while ling means 'lingam or the life-giving a phallic symbol of Lord Shiva'.

Ekalinji Temple is considered to be the actual ruler of the region while the kings serve as the Prime Minister under him. This Holy temple was initially built in 728 AD but due to the passage of time renovations were done by different rulers.

Maharana Raimal too renovated this ancient temple in the late 15th and 16th centuries.

The Eklingji Temple, located on the bank of the Indersagar Lake has near about 108 shrines, within its walls. All these temples are built of marble and sandstone. The main Shrine is a double storied building, looks magnificent with its pyramidal style of roof and beautifully carved tower.

In this main shrine, there is a four-faced black marble statue of Lord Eklingji with Brahma facing west, Vishnu facing north, Shiva facing south and Surya facing east. This historic statue is around 50 feet in height.

Other statues like the statue of Nandi, Shiva’s bull and Bappa Rawal can be seen outside the main Shrine. Bappa Rawal is shown facing Nandi with his hands clasped. Two other statues of Nandi are also there in the temple, one is carved in black stone and the other in brass stone.

The outer walls of the temple are stretched with steps that descend touching the serene waters.

Being located in the middle, Shivlinga is encircled by Goddess Parvati, Lord Ganesha, and Lord Kartikay. Inside the temple complex, one can also find statues of Goddess Saraswati and Goddess Yamuna. The silver door of the main temple is carved with the images of Lord Ganesha and Lord Kartika such a way as if they are guarding their father.

Two tanks namely Karz Kund and Tulsi Kund can be seen in the north of the Eklingji temple. The water of these tanks is consumed during the services of the Lord. During Shivratri, the image of Lord Shiva is adorned with jewelry.

Smaller temples dedicated to Amba Mata and Kalka Mata can also be found in the temple complex.

The acme of the four faceted idols is known as ‘Yantra that stands for the ultimate reality. The Shivlinga ( a Phallic form of Lord Shiva) adorned by a silver snake, acquires the major attraction of people to this place.

Other temples like temples of Pataleshwar Mahadeo, Arvada Mata, Rathasan Devi, and Vindhyavasini Devi are also worth visiting near Eklingji.

The temple is much crowded on Monday than usual days.

How to Reach Eklingji Temple– Ekalingji Temple has located about 22 km away from the Udaipur city on National Highway no. 8.

This city is well connected by road and railways. tourist can hire private cabs or taxi or even can take the help of private or public buses to reach the destination. 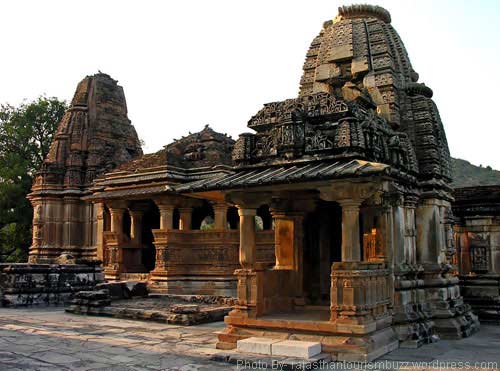