Parshuram Temple or Parshuram Mahadev Temple is an ancient cave where sage Parshuram meditated to seek the blessings of Lord Ram. There are 500 stairs to reach down to the ancient cave.Priest of this ancient Parshuram temple would tell the lots of stories of the history and also the formations which are called 'Kamdhenu'. Temple is located at a distance of 9 km from Kumbhalghar Fort on Sadri-Rajpura-Parshuram Cave Rd.

How To Reach Parshuram Mahadev Temple

By Road: Parshuram Temple is located in the Rajsamand district in the Kumbhalgarh and 98 km from Udaipur. One can easily reach here by bus or taxi.

By Air: Parshuram Temple can be reach through nearest Udaipur Airport which is well connected with regular domestic flights to Delhi, Kolkata, Mumbai, Ahmedabad, Jodhpur and Jaipur. 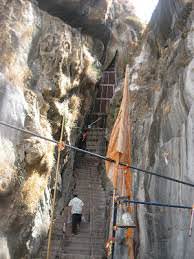