Raniji ki Baori is a very beautiful and architectural fabulous stepwell situated in Bundi town in Rajasthan. The story behind the Raniji ki Baori was that in late 16th centuary king Rao marry to Rani Nathavati as his previous wife fail to give him a baby.

Rani Nathavati did give birth to a son but invoked the jealousy of the queen. So she gave child to the elder queen and devoted to serving her subjects. She undertook the project of building a step well.

Raniji ki Baori was 46 m deep and splendid work like beautiful carving. It was completed in 1699. Its high arched gate and multistoreyed structure with places of worship on each floor make it very different architecture. Rani-ji ki Baoli is thus Stepwell made by the Queen or Queen’s well.

In the entrance there is a narrow gateway of four pillars which are joined superbly at the top by slender arches just under the roof. Ogee (S-shaped) brackets play an important role in Rani-ji ki Baoli, and all arches are decorated with intricately carved stone brackets.

Bundi is located in the south east region of Rajasthan and lies at a distance of 206 km from Jaipur and 36 km away from Kota. It is well connected by road with all cities in Rajasthan. Nearest railway station is at Kota and airpot at Jaipur. 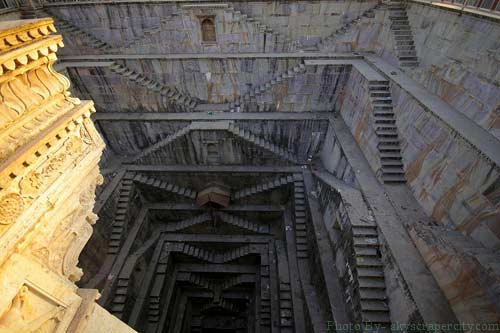