Rajasthan is a place of customs and tradition. The people of Rajasthan follow their forefathers and maintain their lifestyle according to their words. Flying Kite is an integral part of the people of Rajasthan. They fly kites on several occasions and especially on the occasion of Makar Sankranti.

Places For Kite Flying in Rajasthan

Kite Flying in Rajasthan is a great activity you can do here. Every year Kite Festival is celebrated in Jaipur. The International Kite Festival of Jaipur is held in January for 3 days. There are also a prize for the winners and is held at Jaipur Polo Ground.

Kids meet at their roofs to play and defeat each other through kites. Makar Sankranti is celebrated on 14th of January is when the sport of kite flying is almost prevalent, with an International Kite Flying Competition in Jaipur and Jodhpur, while the monsoon period is another favorite. However, but for a brief spell during the peak months of summer, kite flying continues throughout the year. This day in Rajasthan celebrated with sweets like Ghevar, Til-paati, Gajak, kheer etc. 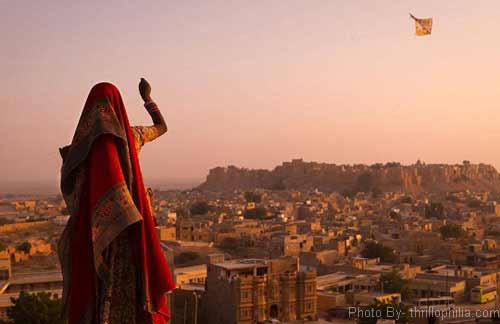 One Response to “Kite Flying in Rajasthan”

Thank you for sharing Kite Festival in Jaipur is very popular. It celebrates in January Month.