Mehrangarh Fort - The Pride of Jodhpur

The Mehrangarh Fort is one of the largest Forts in the country and is situated 400 Feet above the city of Jodhpur, to provide a panoramic view of the whole city. The roots of the fort’s construction are found back in 1459 when Rao Jodha decided to develop this place as the new capital for his kingdom. At that time, this place was known as Bhaurcheeria (Mountain of Birds). The Fort houses a number of palaces inside its premises; these palaces display some of the fine Rajputana artworks and carvings on their walls. The museum inside the Mehrangarh Fort is one of the most heritage-rich museums in the country. The Mehrangarh Fort contains seven huge gates or pols, amongst which the Jayapol (built by Maharaja Man Singh to cherish his victory over Jaipur and Bikaner armies) and the Fattehpol (built by Maharaja Ajit Singh to cherish the defeat of Mughals) are most famous.

The Fort was constructed by Rao Jodha who was the founder of Jodhpur city. After taking the throne, he decided to make a new fort as the Mandore Fort was very old and was considered not safe.

So he laid the foundation of the fort was laid on 1/ May 1459 over a rocky hill about 10 km from Mandore.

The hill used to be the abode of numerous birds and a hermit who was called as lord of the birds. being forced to leave the place the hermit cursed the King as the fort will suffer from the scarcity of the water.

To this date, the region is plagued by a drought every 3 to 4 years.

In Mehrangarh fort, there is a Pearl Palace which was built during the reign of King Sur Singh. It is the “Diwan E Aam” where king meets his public and their issues.

This palace is famous for is known for its beautifully carved architectural screens. There is a Folk Music Instruments Gallery and in this place, there are a number of different types and kinds of folk musical instruments, some particular to a group or community, and some to a region.

In this fort, there is a Sheesh Mahal is famous for its exquisite mirror work and a sophisticated mosaic of tiny fragments.

Another most attractive feature of this palace is made with some of the brightly painted religious figures over the mirror work.

The “Daulat Khana” which is considered the treasure room as this gallery displays one of the most important and best-preserved collections of fine and applied arts of the Mughal period of Indian history, during which the Rathore rulers of Jodhpur maintained close links with the Mughal emperors. It also has the remains of Emperor Akbar.

The most visited is the Chamunda Temple by the tourists.

The Chamunda Mataji was Rao Jodha’s favorite goddess, he brought her idol from the old capital of Mandore in 1460 and installed her in Mehrangarh and this Goddess is considered as the kuldevi of the Parihars.

She remains the Maharaja’s and the Royal Family’s adopted goddess and is worshipped by most of Jodhpur’s citizens as well. A huge celebration is organized at the time of Dusshera at this palace.

How to Reach Mehrangarh Fort in Jodhpur

Things to Consider When Planning to Visit Mehrangarh Fort 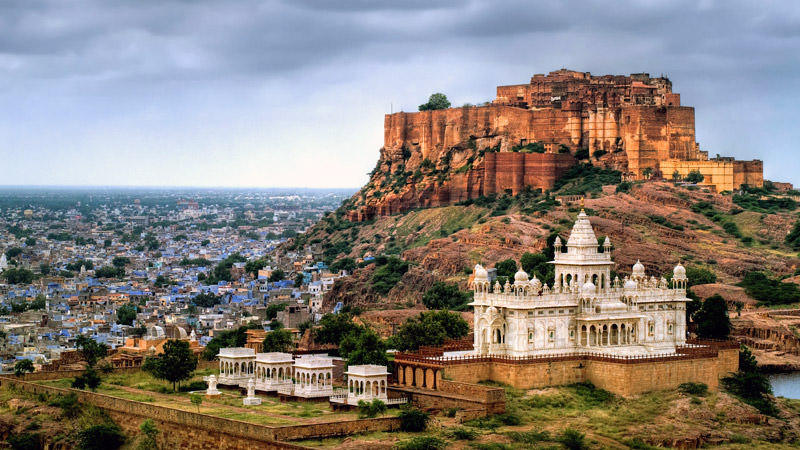 One Response to “Mehrangarh Fort”

Thanks for providing good information about Mehrangarh Fort.