Monsoon Palace or Sajjangarh Palace is a hilltop palace located at Bansdara Mountain peak at about 944 mt above sea level in Udaipur. Maharana Sajjan Singh constructed it in 1883 for using it as the summer retreat for Mewar Kings. Another big purpose for its construction is to watch the progress of Monsoon clouds.This Monsoon Palace is situated at such an altitude that it presents magnificent views of Lake Pichola, Aravalli mountains, and surrounding countryside. Visitors also love the sunset of Sajjangarh Palace. There is also Sajjangarh Wildlife Sanctuary which encircles the palace. Now it is a forest department property and open for visitors.Sajjangarh Palace is among top tourist attractions in Udaipur.
Sajjangarh Palace Timings: 09.00 am to 06.00 pm
Sajjangarh Palace Entree Fee: Indian/foreigner- Rs 10/80 , Autorickshaw/car- Rs 20/65, camera/video- free/Rs20

Maharana Sajjan Singh started the construction of the Monsoon Palace in Udaipur, who was the 72nd ruler of the Mewar Dynasty. The Place reflects the rich culture and history of the Mewar Kingdom.

He ruled for only 10 years due to his untimely death. But it was under his reign that Udaipur gained recognition as the second Municipality in India.

He was a great thinker and developer and have a major contribution to developing the Udaipur City.

In recognition of his outstanding achievements in preserving and developing the Mewar kingdom, and to remind him that his was a princely state under the British Raj, he was conferred the title of “Grand Commander of the Star of India” in November 1881 by Lord Ripon, on the occasion of Queen Victoria’s crowning as the Empress of India.

The palace, built with white marble, is located on the Bansdara peak of the Aravalli hill range at an elevation of 944 m (3100 ft) above mean sea level, overlooking Lake Pichola from the west about 1,100 ft (340 m) below the palace.

The intention of the original planner, Maharana Sajjan Singh, was to build a nine-story complex, basically as an astronomical center and to keep track of the movement of monsoon clouds in the area surrounding the palace, and also to provide employment to people.

It was also meant to serve as a resort for the royal family. Unfortunately, the Maharana died prematurely at the age of 26 (after only 10 years of rule between 1874 and 1884), which resulted in the shelving of his plans for some time.

Before his death, he had built it partially, and it was subsequently completed by his successor king Maharana Fateh Singh who used it to watch the monsoon clouds.

The Royal family also used this building as a hunting lodge.

The white marble palace has high turrets and guards regulating each of the towers. The palace has a grand central court with a staircase and many rooms and quarters.

The palace is built on marble pillars, which are carved with exquisite motifs of leaves and flowers. The walls are plastered with lime mortar.

At night, the illuminated palace with the Rajasthani architecture comprising domes, fountains and jharokhas gives it a fairy tale beauty.

A unique water harvesting structure to collect rainwater in an underground cistern, with a storage capacity of 195,500 liters, exists in the precincts of the palace.

In spite of this, the water supply was found to be inadequate and the palace was therefore abandoned.

How To Reach Sajjangarh Palace, Udaipur

By Road: Sajjangarh Palace is located at a distance of 10 km from Udaipur city. One can easily reach here local taxi, bus or cab.

By Air: Sajjangarh Palace can be reached through nearest Udaipur Airport which is well connected with regular domestic flights to Delhi, Kolkata, Mumbai, Ahmedabad, Jodhpur, and Jaipur. 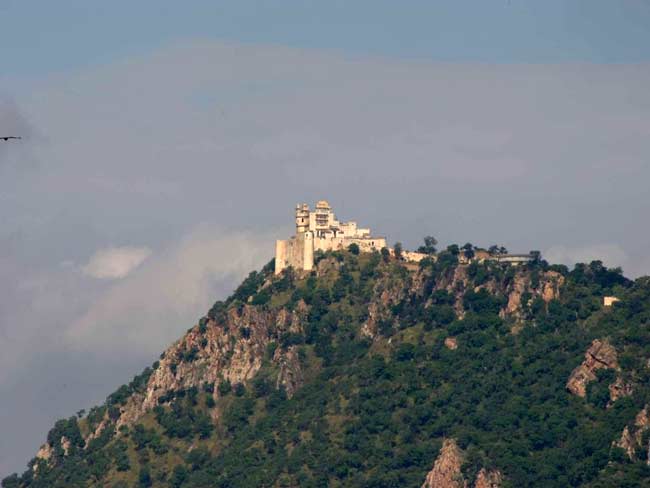