Gulab Bagh is the largest garden of Rajasthan, spread over 100 acres of land.

During the 1850s, Maharana Sajjan Singh took the initiative to built this beautiful garden and was known as Sajjan Niwas Bagh but due to the availability of numerous varieties of roses, this garden is also known as Gulab Bagh or Rose Garden.

This beautiful garden is located on the banks of Pichola Lake on Lake Palace Road, in the southeast of the City Palace complex.

All the trees were signified by nameplate, denoting Hindi, English, and systematic botanical names in the year 1882.

Bougainvillea was planted for the first time in the year 1886 and within 6 years it attained a height of 77 feet.

The boundary of the garden was constructed in the year 1885-86 and the garden was divided into 45 parts according to different flowers, trees, zoo complex and so on.

The foundation stone of the Victoria Museum was laid down by Maharana Sajjan Singh and inaugurated by Lord Landsdown on 2nd Nov. 1890.

The museum houses many rare artifacts and stone manuscripts dating back from 3rd Centaury B.C. to 17th Centaury A.D.

Apart from natural beauty, the Gulab bagh has a library, constructed by Maharana Fateh Singh and is known as Saraswati Bhawan Library.

This library houses many books related to history, archaeology, Indology and several manuscripts that date back to the early medieval period.

This park of the 19th century is regarded as one of the largest urban parks in India and is visited by tourists from all over the world.

This antique garden is located at a distance of 22.9 kms from Maharana Pratap Airport, very close to the Udaipur City Railway Station.

Tourists can take the help of private cabs or rickshaws to reach this greenish Garden. 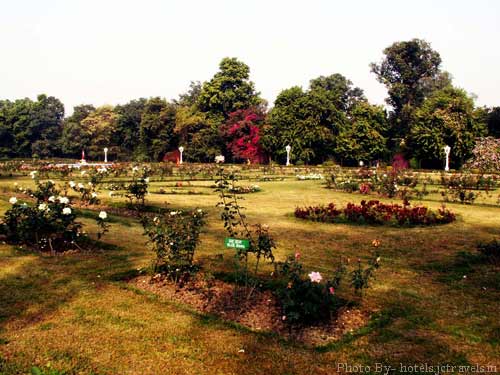