The Ganga Mandir, which resides in the heart of the city of Bharatpur is one of the most beautiful temples in Rajasthan. In it lies the magnificent deity of Ganga Maharaj made of pristine white marble. Maharaja Balwant Singh started constructing this temple in the mid-19th century. However, he had a very unique request that required all the affluent inhabitants of the city to donate one month’s pay to help towards the temple’s creation. While the architecture is unique the Bansi Pahadpur stone of almond color is also a matchless thing. The Gong of the temple is of so great a resonance that it can be heard from distance.

This temple is a center of faith for all Hindus and it has a historical heritage having the beauty of architecture sculpture, carving, engraving, mosaic work, geometrical perfections.

People regard the temple as a symbol of holiness and purification because the Ganga occupies a great place in the minds of Hindus as a sacred Devine river.

This two-storeyed temple is a happy mix of various tiles of architecture and a rare one from the architectural point of view. Artistic carving work has been done on pillars and temple panels.

On the main gate on one side is a statue of Lord Krishna holding the Giri Raj Mountain in his hand while on the other side are Shiva Parvati and Laxmi Narayan Ji.

As a special feature of the temple is that the king and queen could have the first sight of Ganga Maharani and even today a window in their royal palace opens exactly towards the temple of Shri Gangaji and the darshan of Shri Ganga can be held by the king or the queen. 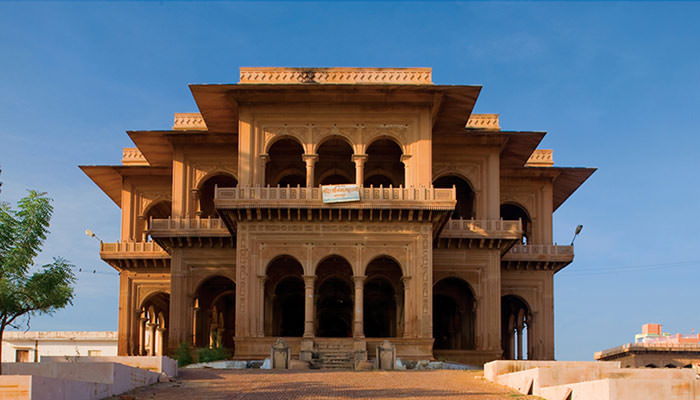