Birthplace of the Great Indian Warrior “Maharana Pratap”, Kumbhalgarh Fort finds its development roots in the 15th century and was expanded through the 19th century. This splendid Mewar Fortress is now a World Heritage Site of UNESCO. The fort of Kumbhalgarh is marvelously erected over a hilltop 1100 Meters above the sea level and is said to house as many as 360 Hindu and Jain temples. You can even see sand dunes of the great Thar Desert from the walls of the Fort. Seven huge gates and ramparts of the fort, just add to its grandeur and its splendor. ‘Badal Mahal’ of the Palace of cloud, right on the top of the Kumbhalgarh fort is one of the most beautiful palaces of the Fort and as its name suggests, it gives you a feeling like wandering in the beautiful, white clouds. It is also noticeable that this fort was not designed by any professional architect, but by Rana Kumbha (of Rajput dynasty) himself.

Kumbhalgarh Fort was built by Rana Kumbha under whom the Mewar Kingdom expanded from Ranthambore to Gwalior. There are about 84 forts built in these stretch of which Rana Kumbha designed 32 of them.

No one could ever conquer the fort except for one time due to a shortage of drinking water.

Maharana Pratap was also born in this palace. The fort was the place of refuge for the rulers of Mewar at times of danger.

Once prince Udai was also taken here when Chittorgarh fort was in danger. Udai Singh later fonded the Udaipur city.

Gateways: The fort is entered from the south through a gate known as Aret Pol, followed by gateways known as Halla Pol, Hanuman Pol, Ram Pol, and Vijay Pol.

The Hanuman Pol is significant as it enshrines an image of Hanuman which was brought by Rana Kumbha from Mandavpur. The palatial complex at the top is approached further through three gateways viz., the Bhairon Pol, the Nimboo Pol, and the Paghra Pol.

One more gateway is situated on the east which is known as Danibatta. This gateway connects the Mewar region with Marwar.

Ganesh Temple: The Ganesh temple was built during the time of Maharana Kumbha and it is located along the road leading to the palaces.

According to one of the inscriptions of Kirttistambha of Chittaurgarh fort, Rana Kumbha consecrated an image of Ganesha in this temple.

Vedi Temple: The Vedi temple was built by Rana Kumbha in AD 1457 for performing rituals after completion of the fort. The building is double storeyed and erected on a high platform.

The temple faces west. It is octagonal on plan with thirty-six pillars supporting the domical ceiling. A triple shrined temple dedicated to goddesses is located to the east of this temple.

Neelkanth Mahadev Temple: Situated to the east of Vedi shrine, this temple was built in AD 1458 and enshrines a Siva linga in the garbhagriha. It is built on a raised platform accessible from the west through a flight of steps.

The temple consists of a sanctum and an open pillared mandapa all around. The shrine is sarvtobhadra with entrance from all the four directions. A stone inscription on the left pillar of the western gate mentions about its renovations by Rana Sanga.

Bawan Devi Temple: This famous Jaina shrine derives its name from the fifty-two (bawan) shrines in a single compound built around the main shrine.

The bigger shrine among the group consists of a sanctum, antarala, and an open mandapa. An image of Jaina Tirthankara is carved on the lalatabimba of the doorway. The smaller shrines are devoid of any idols.

Golerao Group of Temples: The Golerao group of temples is located adjacent to Bawan Devi Temple and consists of nine shrines enclosed by a circular wall. The shrines are adorned with beautifully carved sculptures of gods and goddesses on its exterior.

On the basis of architectural style, the group may be ascribed to the period of Rana Kumbha. A sculpture bears an inscription dated V. S. 1516 (AD 1459) and speaks of one Govinda.

Mamadeo Temple: This temple is also known as Kumbha Shyam, and it consists of a flat-roofed sanctum and a pillared mandapa.

An inscription of Rana Kumbha giving a detailed history of Kumbhalgarh was fixed on this temple. A large number of carved idols of gods and goddesses were recovered from the premises of this temple.

Pitalia Dev Temple: This east facing Jain shrine is located in the northern part of the fort. Built by Pitalia Jain Seth in V. S. 1512 (AD 1455) on a raised plinth, the temple consists of a pillared sabha mandapa and a sanctum having entrances from all the four directions.

The sangha is adorned with images of gods and goddesses besides asparagus and dancers.

Kumbha Palace: The palace of Rana Kumbha is located close to the Pagoda Pol. The palace is a two-storeyed edifice.

It consists of two rooms, a corridor in the middle and open spaces. The rooms are provided with jharokhas and windows in stones.

Birth Place of Maharana Pratap: The mansion known as Jhalia ka Malia or the Palace of Queen Jhali is situated near Pagoda Pol. This is believed to be the place where Maharana Pratap was born.

It is constructed of rubble stone with plain walls and a flat roof. The traces of paint can still be seen on the wall.

Badal Mahal: Badal Mahal is situated at the highest point of the fort. It was built by Rana Fateh Singh (AD 1885-1930). The palace is a two-storeyed structure divided into two interconnected distinct portions i.e. the Zanana Mahal and the Mardana Mahal.

This palace is profusely decorated with wall paintings. The Zanana mahal is provided with stone jalis which facilitated the queens to see the court proceedings and other events in privacy.

How to Reach Kumbhalgarh 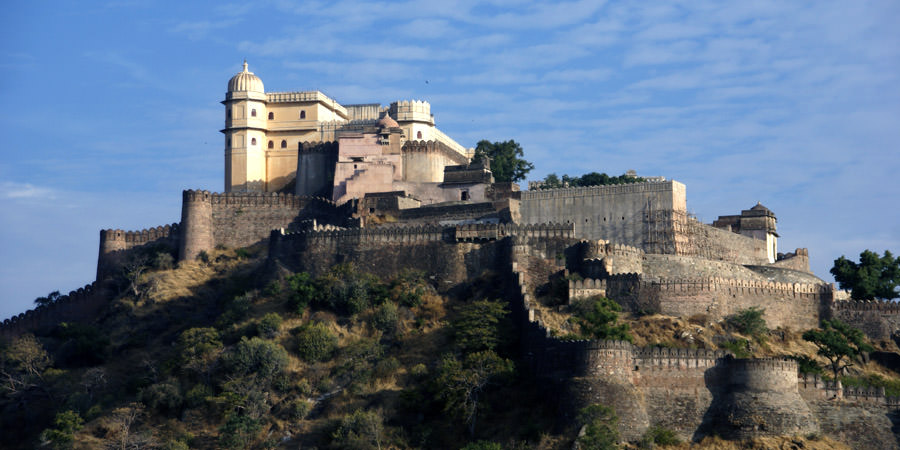