Jaisamand Lake, famous by the name of Dhebar lake, is the second-largest artificial lake in Asia (after the Upper Lake in Bhopal). Expand over the area of 50 sq. km when full, Jaisamand lake of Udaipur was created by Rana Jai Singh in the 17th century. He constructed a marble dam across the Gomati river. This lake is surrounded by Jaisamand Wildlife Sanctuary which preserves around 162 sq. km of forested land.

Jaisamand lake also has 3 islands which are inhabited by the tribes of Bhil Minas. Two big islands combined called “Baba ka Magra” and another small one “Piari”. Nicknamed as ‘Ocean of Victory’ (‘mand’ meaning ‘ocean’), Jaisamand lake remained one of the largest lakes in the world until the building of the Aswan dam in Egypt sby the British in 1902.

Maharana Jai Singh of Udaipur constructed a huge dam of 36.6 meters on the Gomati river and also distributed gold equal to his own weight on the day of its inauguration, June 2, 1691.

Jaisamand lake or Dhebar lake is surrounded by the summer palaces of the Queens of Udaipur. A bund on the lake is 366 mt long, 35 mt high and 21 mt broad at the base.

Its major attraction is its artistic marble dam which has six beautiful cenotaphs and a holy temple of Lord Shiva in the middle. Jaisamand lake has a courtyard on the northern end and a pavilion of 12 pillars on the southern end.

Jaisamand lake has also very rich wildlife due to Jaisamand wildlife sanctuary. The Jaisamand Island Resort which is one of the most luxurious and expensive hotel resorts in Asia is also located in one of the islands of the lake.

Boat Ride Cost- Rs 30-80/-
Jaisamand Wildlife Sanctuary Fee: Indians- Rs 10/-, Foreigners- Rs 80/-, Camera: Rs 200/-
Timings: 10 am to 5 pm, Open all days
Location of Jaisamand Lake : Jaisamand lake is located in the south of Udaipur district. It is at 50 km away from Udaipur. There is a good number of state government and private bus service in this district. There are also direct regular buses from the district headquarter to Jaisamand. 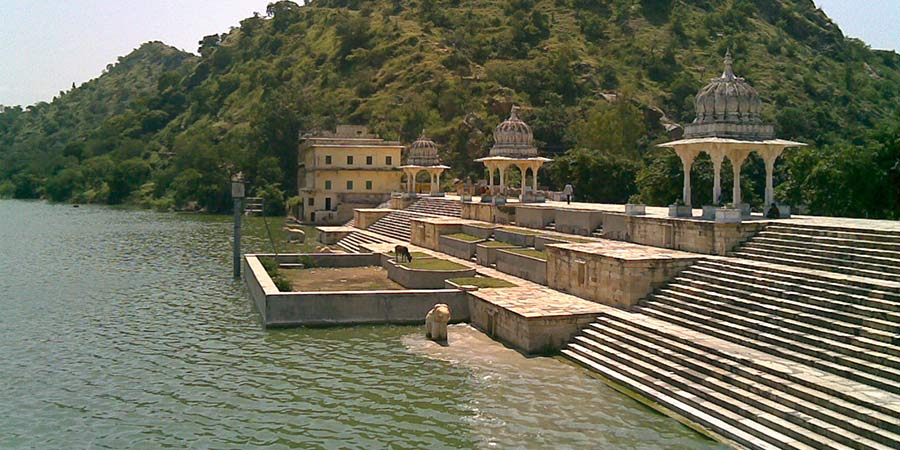