Rajasthan » Rajasthan Travel Blog » How to Spend 4 Days in Udaipur

How to Spend 4 Days in Udaipur

Udaipur is a city of Rajasthan and poplar known as the ‘City of Lakes’.You can explore all the famous attractions in these 4 days in Udaipur. There are many eye soothing sightseeing’s in Udaipur and mostly known for its beautiful gardens and lakes. It can be called as the hub of heritage hotels and also the city is a beautiful place which has all the tourism elements and romantic backdrops such as of lakes, palaces, rural ethnicities and many others. The city is nestled on the banks of the famous Pichola Lake and that increases the beauty of the city. Udaipur used to be the former capital of the princely state of Mewar and is regarded as the Venice of India and the major attractions of the city is the Lake Palace, Fateh Prakash Palace and Saheliyon Ki Baari. Udaipur is home to three interconnected lakes and they are Pichola Lake, the Fateh Sagar Lake and the Swaroop Sagar Lake.

You can reach to Udaipur by air, train or bus. You can reach the city of Udaipur from the major railway junctions of the major cities of India.There are many interstate buses and also buses from the State Transport of Rajasthan where you get comfortable sleeper buses from other towns too.

Day 1: Arrival at Udaipur and Sightseeing

You will reach to Udaipur through any Airline via Delhi or Mumbai to the Maharana Pratap Airport or there are many tourists who also reach this city by road from Delhi or from the other cities of Rajasthan. After transfers to hotel and after have your breakfast and start your trip with the very first view of the stunning City Palace and the tourists can have a full day time watching the beautiful and prime sightseeing of Udaipur which is a grand presentation of amalgamation of Rajasthani, Mughal, Medieval, European and Chinese architecture. This palace is considered as one of the most beautiful and lavish structures in Rajasthan and amongst the best tourist places in Udaipur. The Udaipur Palace was built by Maharana Uday Singh II, overlooks the Lake Pichola provides immensely beautiful scenery. Moving on to the Jag Nivas Lake Palace which is a splendid palace built on an island the Lake Pichola. The palace is also called as the "Lake Garden Palace" and is known as one of the best tourist attractions of Udaipur.And you can end your day with a nice trip of the Jag Mandir Temple and the serene Lake Pichola and the tourists can have the transfers to hotel late evening.

In the morning at the hotel the tourists can carry on their journey to the by visiting the culinary touirsm of Udaipur by visiting any of the rooftop restaurants overlooking the Lake Pichola to enjoy relishing food of Rajasthan and the popular ones are1559 AD, Aravalli, Ambrai etc. and watch the hustle and bustle of the city. Your trip will followed by a ropeway trip which can be enjoyed to have panoramic view of the Udaipur city and it is located on the top of hill near Lake Pichola, near Karni Mata Temple and the  tourists will love to have  a panoramic view of the Lake city. In the mid afternoon the tourist can move to the Sajjangarh biological Park to view the flora and fauna and the place is also known as the Udaipur Zoo.

While returning to the accommodation the tourists can visit the Aapni Dhani which is a place to enjoy the traditional folk dances of Rajasthan, enjoying the mouthwatering dishes of the state and also to watch various puppet shows and traditional forms of art. The visit will indeed remove all the tiredness from them and they can get transfers to hotel.

On the third day the tourists can visit to some other sightseeing of Udaipur which will be starting with serene visit of the Jagdish Temple and this temple is dedicated to Lord Vishnu and the temple is a grand example of Indo-Aryan architecture and the carvings of the temple is worth praising then you can have the beautiful visit of the ‘Saheliyon ki Bari‘or known as the garden of the maidens and this is a beautiful garden and it is decorated with fountains and kiosks and each of the fountain plays a different sound and this garden house was made for the lady companions of the princess. Moving on the the grand visit of the Fateh Sagar Lake which is one of the grand lakes of Udaipur and this is an artificial lake constructed by Maharana on the northern side Lake Pichola and you can see a stunning view of it where there is a public park and then move on to the Udaipur Solar observatory Park to have  a nice trip. You can end your trip with a late evening visit of the Dudh Talai and the Gulab Bagh which are two beautiful gardens that should be enjoyed in the dusk and trip and will offer a cool reprieve from the heat.Transfers to hotel followed after the trip

You can start off your trip after having breakfast and visit to the local markets of Udaipur to enjoy a mind blowing shopping at the various shops and there are ample of souvenirs to discover and you can buy for the local Rajasthani apparels and jewelries and you can move on for an adventurous tour of the Aravalli ranges on horseback where you can climb up to the Aravalli and the other stunning views of the mountains can be discovered. You can have a nice stay for a camp or can return back to your hotel preparing for the transfer to Airport for departure. 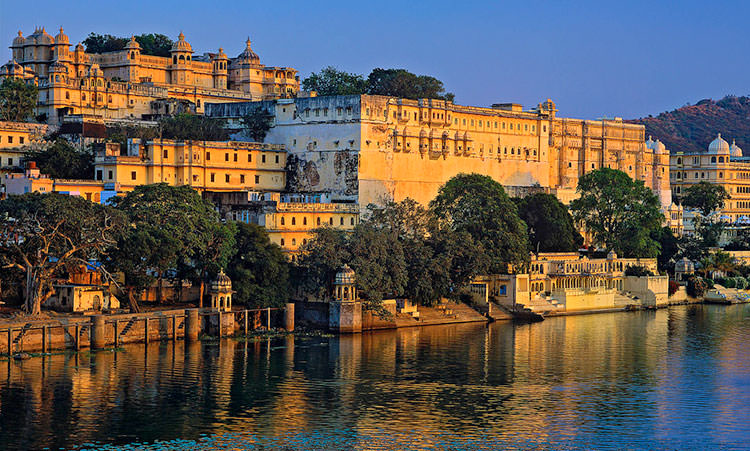 Lake Pichola and the City Palace in Udaipur