‘Khyal’ in hindi language means “Thought”. Khyal was a folk play which involves dance also. Khayal dance is the only dance which is inherited from different themes. Performed by the Bhawai tribe of Rajasthan. Their ancestors also perform this dance based on the themes of hindu epics sch as Ramayana and the Mahabharata. Women do not participate in Bhawai dances.

Khayal dance is believed to be originated from Jats and later on Bhawai dances which also include Jats, starts performing it.

It involves dance and dramas which depicts humorous and comic characters. These characters may be of a greedy moneylender, barbers, baniyas etc. Among the various items , Khayal dance bring the items that have been in vogue like the “Bohara-Bohari”, “Surdas”, “Lodi-Badi”, “Dokari”, “Shankari”, “Bikaji”, etc. 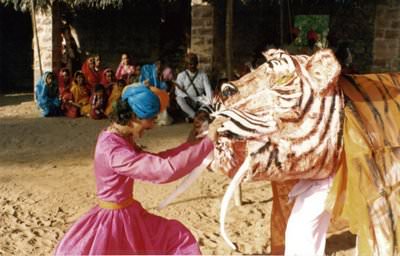 it is very easy