Kumbhalgarh is 51 km from Nathdwara and has some attractive heritage sites.

Kumbhalgarh Fort- Kumbhalgarh Fort was built in the 15th century by King Rana Kumbha and is located on the banks of the River Banas. Tourists in large numbers flock the fort as it is the second most important fortress of the state of Rajasthan. This huge fort is surrounded by 13 peaks, watchtowers, and bastions. Kumbhalgarh Fort is spread over 36 km of the Aravallis. It houses a domed palace built by Maharana Fateh Singh. The long winding wall was built to guard against the attacks of enemies, and this wall is supposedly the second to the Great Wall of China for its length.

Neelkanth Mahadeo Temple– Neelkanth Mahadeo Temple, situated near the Kumbhalgarh Fort has a six feet Shivling made of stone and dedicated to Lord Shiva, who is considered to be the only deity of the area. According to history, King Rana Kumbha used to worship this deity, and in an unpleasant incident, he was beheaded by his own son at a time when he was offering prayers at the shrine.

Badal Mahal– Badal Mahal, also known as the ‘Palace of Clouds’ is located at the top of the Kumbhalgarh Fort. This palace has two storeys, and the whole building is divided into two interconnected segments called the Mardana Mahal and the Zanana Mahal.

Vedi Temple – Vedi Temple was constructed by Rana Kumbha to honour the sacrifice of the pilgrims and is located very close to the Hanuman Pol of the Kumbhalgarh Fort. The structure of this jain temple was renovated by Maharana Fateh Singh, later and is considered to be the only remnant among all sacrificial places in the country.

Udaipur is located 93 kms away from Narlai and is also known as city of lakes.

City Palace – Udaipur City Palace, a palatial buildings in Udaipur is the largest amongst its kind in Rajasthan. Maharana Udai Mirza Singh constructed this beautiful palace in 1559 and declared as the capital of the Sisodia Rajput clan. Udaipur City Palace is situated on the banks of the Pichola Lake.

Pichola Lake – Pichola Lake is a artificial lake, constructed in 1362 A.D and named after the Picholi village. This lake developed from a Dam that was constructed in order to meet the drinking and irrigation requirement of Udaipur. Maharana Udai Singh, the king was highly impressed by the surroundings of the lake and he decided to build the city of Udaipur on the banks of this lake.

Lake Palace – Lake Palace of Udaipur was bulit by Maharana Jagat Singh as a summer retreat in the year 1743. This Palace is situated on the Jag Niwas Island amist the Pichola Lake. Now, this beautiful architectural building, arorned with pink stones is transformed into a 5 star hotel.

Fateh Sagar Lake – Fateh Sagar Lake is one of the 4 beautiful lakes of Udaipur. This aritificial lake was developed in the year 1678 by Maharana Fateh Singh and because of its blue water and green sorrounding, has heen nick named as ‘ Second Kashmir’. There are three small islands situated amidst the lake.

Gulab Bagh – Gulab Bagh is the largest garden of Rajasthan, spread over 100 acres of land. During 1850′s, Maharana Sajjan Singh took the initiative to built this beautiful garden and was known as Sajjan Niwas Bagh but due to the avaiability of numerous varieties of roses, this garden is also known as Gulab Bagh or Rose Garden.

City Palace Museum – City Palace Museum, known for its rare and ancient collection, is four centuries old museum built in 1559 A.D by Rana Udai Singh II, father of Marana Pratap. Also sometimes this museum refer as Pratap museum. Rana Udai Singh laid the foundation of museum after the birth of his grand son Amar Singh I and on the advice of hermit Goswami Prem Giriji Maharaj.

Bagore Ki Haveli – Bagore Ki Haveli is an old building build in front of the Lake Pichola at Gangori Ghat. It was built by Amir Chand Badwa, the Prime Minister of Mewar in 18 th century.

Ahar Museum – Ahar Museum is known for its various architectural features and sculptures pieces date back to 1700 BC. A historic tenth century metal figure of Buddha is a special attraction in the museum. There are rare pieces of earthen pots which are of historical importance.

Dil Kushal – Dil Kushal is considered as Women’s section in the City Palace. It is one of the large area of the City Palace built for royal ladies which was added by Maharana Karan later on.

Jagdish Temple – Located near the City Palace, the Jagdish Temple is dedicated to the Hindu Lord Vishnu and is considered as the largest temple in the city. This Temple was constructed by Maharana Jagat Singh of Udaipur in 1651, which represented the Indo-Aryan architectural style.

Jag Mandir Palace – Jag Mandir Palace is a beautiful and luxurious palace on an island in Lake Pichola. Well known as Lake Garden Palace, it’s construction completed in the reign of three Maharana’s of Sisodia Rajputs.

Saheliyon Ki Bari – Saheliyon Ki Bari which means ‘Garden of the Maids of Honour’, was constructed by Maharana Sangram Singh in the 18th century for the royal women. The main highlights of the garden are the fountains, which were imported from England. All the fountains are constructed in the form of birds spurting water from their beaks It is said that the king himself designed this beautiful garden, and gifted it to his queen who was accompanied by 48 maids after her marriage.

Chittorgarh is just 107 km from Nathdwara and known for its historical forts and palaces.

Vijay Stambh : The Vijaya Stambh, established by Maharana Kumba in Chittorgarh is a nationalistic master work built to remember the triumph of the kingdom over the trespasser Modammed Khilji. The tower is adorned memorably with Hindu God and Goddess.

Kirti Stambh : Kirti Stambh is a 22 meters tower and was established by the first Jain Tirthankar and is committed to Adinath. Constructed in Solanki style architecture, it has balconies and windows.

Meera Bai Temple : Meera Bai temple was built in North Indian manner, which has an open arcade in the region of the chamber with four pavilions in each angle.

Padmini’s Palace : Padmini Palace was built for Queen Padmini whose awesome beauty attracted Allauddin Khilji and as a consequense of which he destroyed Chittorgarh.

Ranakpur is just 57 km from Nathdwara and has temples and pilgrimage sites.

Ranakpur Jain Temple- The Ranakpur Jain Temple is counted among the five important pilgrimage sites of the Jains. The Temple, made of light coloured marble is located on the western side of the Aravalli Range and is dedicated to Lord Adinathji. According to legends, a Jain businessman named Seth Dharna Sah and Mewar Ruler Rana Khumba constructed this temple.

Desuri– Desuri is a small village of the Pali District, located at a distance of 16 km from the town of Ranakpur. Temples of Hindu deities like Lord Shiva, Navi Mata, and Lord Hanuman are the highlights of this place. The temple of Parsuram Mahadeo is also located in the hills nearby Desuri.

Muchhal Mahavir Temple– Muchhal Mahavir Temple is located in the Pali District of the Rajasthan and is dedicated to Lord Mahavir. The temple is located in the Kumbhalgarh Sanctuary, about 5 km away from the Ghanerao. This temple is known for the statue of the Hindu Lord Shiva with moustache. At the entrance of the temple two statues of the elephants can be seen that stand in the guarding position. Garasia tribal villages are the nearby attractions to this place. Tourists can buy beautiful traditional costumes from this place.

Narlai– Narlai is a small village, which rests in the foothill, 6 km away from the renowned town of Ranakpur. Travellers can find several Jain Temples and Hindu Temples in the region. Among the tourists, the murals and the architecture of the temple of the Lord Adinath, the irst Jain Tirthankara is very popular.

Sadri– Sadri is counted among the important pilgrimage centres of the Pali District of Rajasthan. Earlier, this city was also known as the ‘Gate of Mewar to Marwar’. The place holds immense religious significance for the Jain community. For the visitors going to visit the Ranakpur Temple and Shri Parshuram Mahadev Mandir, this place serves as the base. In addition to the Varahavtar Temple and the Chintamani Parsvanath Temple, the old Dargah of Khudabaksh Baba is also a popular attraction of the place.

Sun Temple– The Sun Temple, also known as the Surya Narayan Temple, is situated in proximity to the Ranakpur Jain Temple. The Lord Sun is shown riding his chariot in this temple. The warriors, horses, and celestial bodies carved on the polygonal wall of the temple represent the artistic excellence of the people of the bygone era. Devotees in large numbers from all around the country visit this temple to seek the blessings of Lord Sun. Devotees can also visit the temple of Amba Mata, situated close to the temple of the Sun God. 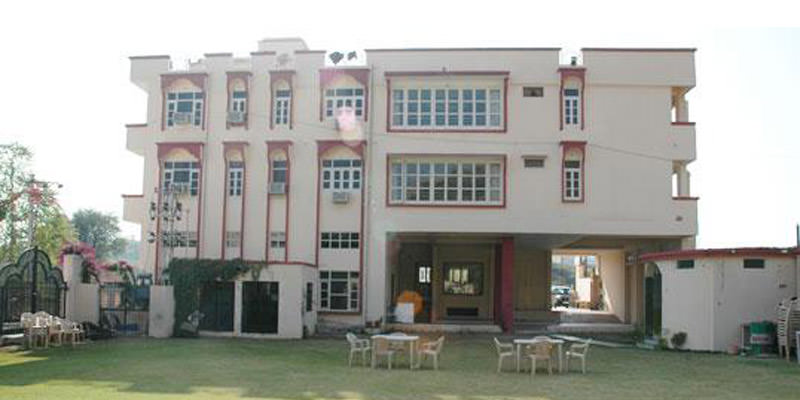