Dausa District was constituted on 10th April 1991 by separating 4 Tehsils namely Dausa, Baswa, Sikrai & Lalsot of Jaipur district. On 15th August 1992 one more tehsil, Mahwa Tehsil of Sawai Madhopur was included in Dausa district.Dausa derived its name from Devgiri, which is a hill closeby. A fort is located on the top of hill. The fort was constructed by the Badgujar Kings. The main occupation of the people of Dausa is agriculture.

Wheat, bajra, rapeseed, mustard and groundnuts are the main crops of the district. A unique singing style of this region is the folk art of Hea-Khayal. Its uniqueness lies in its traditional singing. It is highly stylized.

Dausa is located in East Rajasthan, with Alwar in the North, Sawai Madhopur to its South, Jaipur on its West and Bharatpur to its East.

Transportation in Dausa is well-developed. The nearest airport to Dausa is Sanganer Airport at Jaipur. The district is well-connected by an extensive rail network. The nearest railway station is Bandikui Junction. Road network in Dausa is very well connected. NH-11 passes through it and connected Bikaner and Agra. 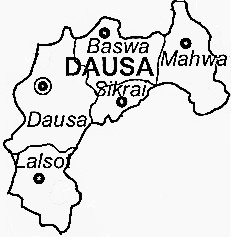