Jaipur District is a district of the state of Rajasthan in western India. The city of Jaipur is Rajasthan's capital and largest city, is the district headquarters. It is the tenth most populous district in India.Jaipur which means the city of victory was built exactly 273 years back. There are 13 tehsils which are named as Jaipur, Amber, Bassi, Chaksu, Chomu, Mojmabad, Jamwa Ramgarh, Phagi, Phulera, Kotputli, Sanganer, Shahpura, Viratnagar.

Maharaja Sawai Jai Singh, the Second, who gives the city its name, is credited with laying of the foundation stone of the beautiful Pink City in the year 1728. The blueprint of the city is the brain child of the uber talented Vidyadhar Bhattacharya, a descendant of the Shaspati lineage. Shilpa Shastra and the Pithapada form the keystone of his vision.

Jaipur district is located in the east of Rajasthan state. In the North of it Sikar, Mahendragarh district (State Haryana), In the South Tonk, In the East Alwar, Dausa, Sawai Madhopur, and In the West Nagaur, Ajmer district situated. East and North area of Jaipur district is surrounded by Aravalli hills.

Jaipur climate is extreme with hot and humid summers and chilly winters. Maximum temperature during the summers (from April to July) reaches a high of around 45ºC. On the other hand winters have sunny and pleasant days and bitterly cold nights. Temperature can touch a low of around 5ºC, mostly during the nights.

Nearest airport is Jaipur airport which is at a distance of 11 km from Jaipur city. Jaipur railway station is well connected to other major cities railway station. Jaipur has well maintained road network and also included in Golden Travel Circuit of India. 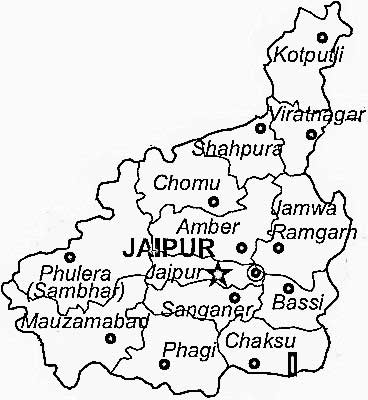