Pali is a district of Rajasthan which has its existence from the pre historic age. Pali town is the headquarter of the district. Pali have 9 sub- divisons or Tehsils namely- Sojat, Marwar Junction, Jaitaran, Raipur, Sumerpur, Bali, Pali, Rohat and Desuri. Rani is proposed to be the 10th tehsil of Pali district. Pali District is one of the well-known tourist destinations of India.

The climatic conditions of Pali district are some what different than the Western Rajasthan. Although, basically the summer season raise the temperature upto 46-47 degree centigrade at peak Time in May-June , a large variation in temperature  is found due to adjoining green and hilly areas. Winters are moderately cool during December-Janruary  lowering the mercury to 4-5 degree centigrade occasionally. Average rainfall in the district during the months of July-October is 300 mm.

Pali is well connected by road and railways. Regular government and private buses are available to other major cities. Pali railway station connects Pali with all the major cities of Rajasthan and rest of india. Jodhpur airport is the nearest airport to pali district. 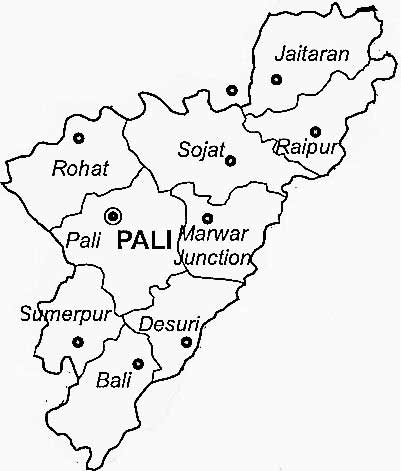