Chittorgarh is known for its massive fort which is 3 miles long and 495 feet high and also for Vijaystambha and Kirtistambha (Tower of Victory). Mirabai, 16th century poet and Rani Padmini belongs to Chittorgarh. Rajasthani, Hindi and English are the languages which are spoken in Chittorgarh.

Chittorgarh is located in South-Eastern Rajasthan with its Eastern borders being manned by Kota, Mandsaur and Banswara to its South-West, Rajsamand and Udaipur on its West and Bhilwara and Bundi to its North. 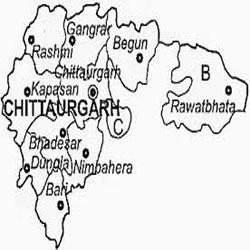