Dholpur District is a district in Rajasthan, which is a state in western India. The districts headquarters is located in the town of Dholpur. Dholpur has five tehsils namely - Dholpur, Badi, Rajakhera, Basedi, and Saipau.Dholpur is also known as Dhaulpur. The present name is said to have been derived from Dhaulpur as a separate district came into existence in 1982 comprising four tehsils of Bharatpur namely Dholpur, Rajakhera, Bari and Baseri. Dholpur according to the Epics was initially known as Dhawalgiri and later on Dhaulagir, and now as Dholpur. Before the battle of Mahabharat this whole area was under the Yadavs. Whose different branches were spread over the entire area extending from the south of the river Chambal.

The economy of the district is mainly based on agriculture. The major crops produced in Dholpur are pearl millet, paddy, sugarcane, wheat, barley, pulses, red chillies and guarseed. Dholpur is also known worldwide for the Dholpur stone.

Dholpur district has Agra to its North-East, Morena on its South, Sawai Madhopur to its West and Bharatpur to its North. It is located at south of Delhi at a distance of 250 km.

Dholpur has preety hot climate during summers and pleasant cold weather during winters. Temperature in dholpur district ranges from 44 C to 7 C. 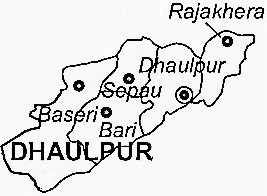