Bharatpur is one of the well known tourist destinations in India. Bharatpur is also regarded as the 'Eastern Gateway to Rajasthan'. Maharaja Suraj Mal founded Bharatpur in 1733 AD and was a well bastioned city. According to a popular legend, Bharatpur derives its name from Bharat, the brother of Lord Rama who was one of the incarnations of Vishnu. Bharatpur was under the dominion of the Jats in the17th century.

Bharatpur is internationally famous for its Keoladeo Ghana National Park, one of the top-graded bird Sanctuaries in Asia. Three rivers, the Ban Ganga, Rooparel, and Gambhir, cross the district.

Bharatpur is located in eastern Rajasthan with Gurgaon to its north-east and north, Mathura and Agra on its East, Dholpur to its South and Sawai Madhopur, Dausa and Alwar on its West.

Bharatpur district has amazing view and climate in monsoon and winters. Bird watching of beautiful migratory birds can be seen in the Keoladeo National Park during that period. Maximm temperature is 46 C during summers and minimum temperature is 5 C during winters.

Bharatpur railway station is well-connected to other major cities such as Jaipur, Mumbai, Ahmedabad and Delhi. Bharatpur is well connected by road with Agra, Delhi, Mathura and Jaipur. There are regular bus services that operate for all major cities. The Indira Gandhi International Airport at Delhi is the nearest airbase to Bharatpur. It is located only 184 km away from the Bharatpur. 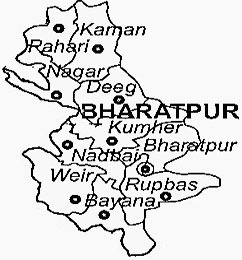