The climate of Sri Ganganagar varies to an great extent. The tempreture varies from 50°C in summer to 0°C in winter.

Nearest airports to Sri Ganganagar is Amritsar which is 354 Kms by road. It is well connected by road and railaways to other part of Rajasthan and India. 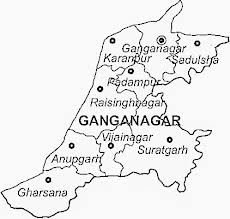 One Response to “Sri Ganganagar District”

road map of the district is illegible.It should be more clear