Jhalawar district is a district of the Indian state Rajasthan in western India. The town Jhalawar is the district headquarters. Jhalawar district has a rich history and natural wealth. It features ancient forts and pre-historic cave paintings. Jhalawar has seven tehsils which are Aklera, Gangdhar, Jhalara Patan, Khanpur, Manohar Thana, Pachpahar and Pirawa.

Jhalawar district is a former princely state which was created from Kota in 1838. The name of the district comes from the Jhalas, a clan of Rajputs who were the rulers of the princely state.

Jhalawar district is located in South-Eastern Rajasthan with boundaries of Madhya Pradesh to its East and South- West and the Mukandra mountains on the North.

Summers are extremely hot in Jhalawar while monsoons and winters are quite pleasant for sight-seeing. Temperature ranges from 42 C in summers to 10 C in winters. 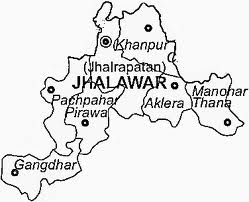