District Baran was earlier a part of Kota district and carved out on 10th April 1991.The district got the name from the town Baran . It is also the district headquater. Baran district comes under parliamentry constituency Jhalawar-Baran. It is divided into four assembly constutuencies namely Anta, Kishanganj, Baran-Atru & Chhabra. Hadoti is the main dialect of Baran district. There are eight tehsils in the district namely Baran, Anta, Atru, Mangrol, Chhabra, Chhipabarod, Kishanganj & Shahabad. For administrative purposes, the district has been divided into three sub-division viz., Baran, Shahbad and Chhabra consisting altogether of seven tehsils.

The district is well connected to all district headquarters of the State. The total road length in the district was 1,491 kms as on 31 March 2000. The nearest airport is at Jaipur (239 kms). The Baran Railway Station is connected to major parts of the country by frequent trains. Trains for Bhopal, Jaipur, Jodhpur, and Kota are regularly available from this railway station. 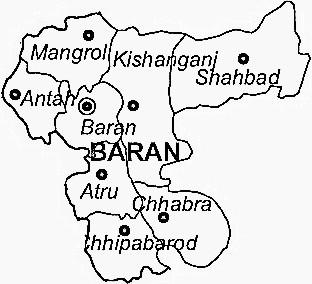