Jalore District is a district of Rajasthan state in western India with its administrative headquarters located in Jalore city. There are seven tehsils namely Jalore, Ahore, Bhinmal, Raniwara, Sanchore, Sayala and Bagoda in Jalor.Jalore economy is based on animal husbandry and agriculture. Before independence the present district of Jalor was a part of Jodhpur province. Administratively, it was divided into three Parganas of Hukumats- Jalore, Jaswantpura and Sanchore.

History was written on 30th March 1949 when Rajasthan state was formed and Jodhpur province was incorporated into it and consequently, Jalore became a part of Jodhpur province. 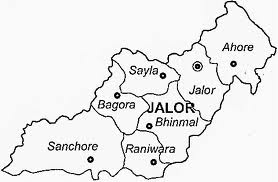