Pratapgarh district, a part of Udaipur Division is the 33rd district of Rajasthan. It was created on 26 January 2008. Pratapgarh town is the administrative headquarter of the district. This district with enough historic importance is well known for pure gold and glass-inlay handmade unique jewelry called 'Thewa'.

Pratapgarh district issituated in the junction of the Aravali mountain ranges and the Malwa Plateau. It is sorrounded by Chittorgarh on the north, Udaipur district on the west , Banswara on the south- west and by Madhya Pradesh on the south and south east. Pratap garh district is about 177 kms away from the district headquarter of Udaipur.

The climate of Pratapgarh is characterized by Sub-tropical dry climate with distinct hot summer, cold winter and rainy monsoon. The highest temperature goes avove 43°C in May-June and the lowest up to 6 °C in December-January. The district also experiences average rainfall during the period from June-September.

Pratapgarhis well connected by road with major cities in Rajasthan, Madhya Pradesh and Gujrat. Regular government and private buses are available. It is the only district without rail-connectivity in Rajasthan state. The Maharan pratap airport at Udaipur is the nearest airport to the district headquarter and is almost 155 kms away. This airport is served by a good number of flights from Jaipur and other cities. 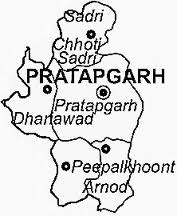