It is organized in honoring the death anniversary of the great Sufi saint, Khwaja Moinuddin Chisti at his Dargah.

Khwaja Moinuddin Chisti, the founder of Chishti order of fakirs in India, came from Persia. The saint spent his whole life in the service of mankind and is thus known as Khwaja Garib Nawaz, signification as protector of the poor.

It is said that the saint comprised death by moving to a cell for six days in isolation. The immortal remains of the holy saint have been entombed at this Dargah.

The six days long auspicious fair is celebrated with full passion by the followers of the saint, which comes to an end on sixth Rajab, ‘Chati Sharif’. The whole city of Ajmer is beautifully decorated to celebrate this fair.

During these six religious days, pilgrims gather and offer prayers on the Dargah for prosperity and peace in their lives. Devotees offer Jasmine and Rose flowers, sandalwood, perfume and other offerings called ‘Nazrana’ on the Dargah.

In this fair, famous Qawwals from various places gather here to sing Qawwalis at the holy Dargah in remembrance of Khwaja and God. It is believed that God fulfills the wishes of all those who pray at the shrine with pure hearts.

During nights ‘Mehfil Khana’ gets packed by the visitors to enjoy religious assemblies (Mehfils), where mass prayers are also conducted for the eternal peace of the Saint and mankind.

Separate places are dedicated to the women attending the Mehfils, presided over by the Sajjada Nashin of the Dargah.

‘Jannati Darwaja’ or the gateway to heaven is opened in the morning on the concluding day of the fair and it is believed that crossing the gate seven times assures a place for the human being in the heaven. 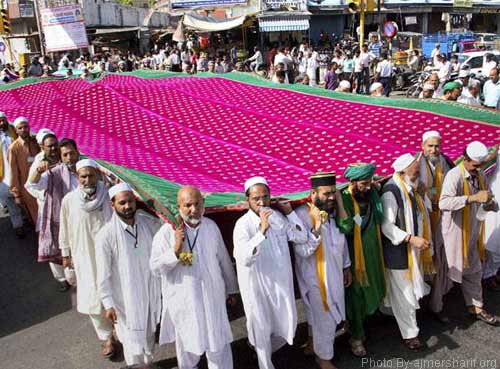