This will surely keep the party banging till late at the Club Mehran. Interactive daytime sessions for visitors, school children and families are staged against the breathtaking backdrop of the Fort.

This celebration of music organized in the Fort of Mehran Garh for four nights and three days of events under the brightest full moon or in “Sharad Purnima”. The fort is known for its sophisticated carvings & extensive yards has a long history to define.

The Fort, that has raised a number of great warriors, is a representation of the wonderful royal lives and its martyrs and remarkable history in Rajasthani culture.

And in this most expected moment when the Mehrangarh Fort decorates itself to welcome the annual Rajasthan International folk festival, its yards, gardens and lavish rooms, are filled with flowers and lights to celebrate music.

In the festival, each part or place has a different theme: intimate, dramatic, peaceful or spiritual. Visitors can enjoy wandering in the gardens of a chokeslam, discover the walls, or party in the beautiful city Jodhpur.

This fort can also be visited for the Maharaja’s collection of weapons, books and exclusive manuscripts, small paintings, and bright artistic works of art.

The folk festival promises some of the most sizzling performances from local and international artists. The shows start after the sunset, and the heartwarming and soulful music begin to reverberate through every corner of the Mehrangarh Fort making the crowd enchanted with the essence of Rajasthan culture and music.

All kinds of musical instruments like tabla, violin, sarangi, sitar, mridangam, as well as classical dancers from all of the country take part in this heritage musical event.

The festival has been endorsed by UNESCO as a “Peoples’ Platform for Creativity and Sustainable Development.”

RIFF 2019 will witness young talents like Dhun Dhun Group and Asia manga along with Butter Manganiyar.

An exceptional vocalist who has emerged from the Kirana Gharana and is the master of Santvaani (words of saints), the musical tradition of Karnataka, Daasavani (words of a devotee) and Maharashtra will be an attraction of RIFF 2019.

Sondorgo, a band from Hungry. The band plays lesser-known music of the Serb-Croatian communities that live along the river Danube along with the gypsy and Balkan tracks of the world.

They play different styles of music with 17 instruments.

Davy Sicard is from the island of La Reunion. Often referred to as the master of modern ‘Maloya’,

Maru Tarang is an Australian Rajasthani music association of Jeff Lang and Bobby Singh from Australia and sin Lang and Bhungar Manganiyar from Rajasthan.

They will present their first album ‘Blue City’ and will also give insight into their upcoming ventures.

It is one of the most loved contemporary instrumental music bands in Brazil. Their music is influenced by Africa and Brazil and hence includes Samba and Reggae with electronica, ethnic jazz, and carimbo.

Jodhpur RIFF is a 5-Days celebration of Rajasthani art and culture right at the foot of the Mehrangarh Fort in Jodhpur’s the Thar Desert.

It is a charitable, non-profit partnership project of India’s two biggest heritage trusts – Mehrangarh Museum Trust and Jaipur Virasat Foundation and also been recognized by the UNESCO as a People’s Platform for Creativity and Sustainable Development.

Coinciding with Sharad Poornima, the brightest full moon night in India, the Jodhpur RIFF hosts a series of spectacular concerts and other events, annually, in and around the Mehrangarh Fort.

It always witnessed a huge turnout, and hence it is recommended that you book your tickets way in advance. The nights of music, dance, and other folk arts in the desert will surely thrill you!

For Complete Programs Details of the Festival – Click Here 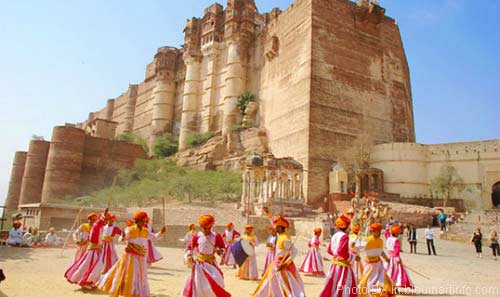