Gogaji Fair is celebrated in the memory of Gogaji who was believed as a snake king. Gogaji also is known as Jahar Veer Gogga who was a folk idol of Rajasthan in India.

He was a warrior-hero of the region, recognized as a saint and a ‘snake-god’. Gogaji or Jahar Pir, one of the snake-kings, and a Chauhan Rajput had an empire near Ganganagar in Rajasthan.

The fair is inspired by the worship of Gogaji which starts in the Bhaadra month of Hindu calendar. The majestic fair of Gogaji is held at his birthplace and Samadhi sthala which is called as Gogamedi. Gogamedi is located in a quiet a far distance from Jaipur, in the Hanumangarh district of Rajasthan.

It is believed that Gogaji went into samadhi at Gogamedi. Thousands of followers gather to pay homage at this memorial place every year in the month of Bhadra which falls between August and September during the Gogaji fair, which lasts for 3 days.

It is quite a sight to see people singing and dancing to the beats of drums and gongs with multicolored flags called marks in their hands.

The songs and bhajans on the life history of Gogaji are recited accompanied by music played with traditional instruments like Damru, Chimta, in the fair which attract a mass number of listeners. At his birthplace Dadrewa the fair goes for over a month.

It is a common sight to see people with snakes lying around their necks. It is common belief among devotees that Gogaji will protect them from snakes. According to a folklore in and around his birthplace Dadrewa it is believed that if someone picks up even a stick from johra (which is a barren land which has a sacred pond in Dadrewa, it would turn into a snake.

Devotees of Gogaji worship him when they get a snake bite and apply sacred ash or bhabhoot on the bite as an instant medicine. 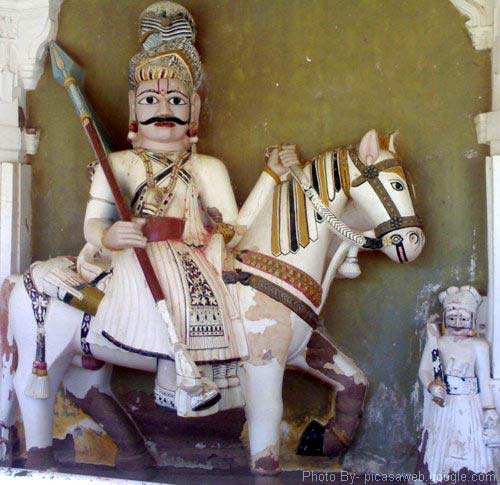