Mallinath Fair is mainly a big cattle fair near the shrine of a local hero, Rawal Mallinath. It is the biggest cattle fairs of Rajasthan which held every year.

Mallinath Fair is held near Tilwara village in Barmer District from Chaitra Budi Ekadashi to Chaitra Sudi Ekadashi which falls in March-April.

In this fortnight fair many highly popular breeds of cows, camels, sheep, goats, and horses attract people not only from Rajasthan but also from nearby states like Gujarat and Madhya Pradesh.

According to the legends, it is believed that this fair was started when the transactions between the admirers of Rawal Mallinath, gathered in Tilwara, riding on well-bred animals to meet him.

Rawal Mallinath was a warrior saint and known to be a horse lover.

On the Mallinath Ji shrine, people offer ‘batashas’ and ‘laddoos’. People pray and believe that their wishes would be granted. People offer miniature horses as a token of thanks when their wishes are fulfilled.

Many traders come from Mathura, Agra, and Aligarh who bring wood, brass and bronze horses to sell at the fair.

Mallinath fair starts by hoisting of the flag of Rawal Mallinathji, accompanied by songs describing his greatness. Among the main features of the Mallinath fair are the races of the Bullocks, camels, and horses.

These races which are organized at the fair gives the best breed animal as a winner. The prize-winning animals sport white badges on their heads and command high prices at the fair.

There are many shops also selling general items and agricultural tools. There is a different market for animal fodder at the fair.

Tilwara is a rail-head on the Jodhpur-Barmer route. There are regular buses between Balotra, Jodhpur, and Barmer and Tilwara. 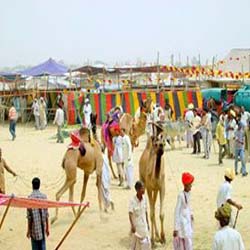