The Mahavirji Fair is celebrated on the eve of Chaitra Shukla Ekadasi to Baisakh Krishna Dwitiya which falls between March-April to commemorate the memory of Shri Mahavir Swami, the 24th Tirthankara called as saint of the Digambar Jains, in Chandangaon of Rajasthan.

The temple of Mahaveerji is very beautiful as exterior & interior walls of the temple are richly decorated with beautiful carvings and golden paintings to improve the attraction, impression, and glory of the temple.

The fair runs for quite a few days longer. In this fair, the Jains take part with great enthusiasm and devotion. The major attraction of the fair is the Rath Yatra of Mahaveerji.

The fair of Mahavirji reaches its peak on Baisakh Krishna Dwitiya when the image of the deity is taken to the bank of river Gambhir in a grand procession for Kalash Abhishek.

The golden chariot or the rath is drawn by bullocks. Four people wave chanvars which are fans made of white feathers over the image and the site resounds with “bhajans” and religious songs.

There are many shops exist at the site, which are permanent sellers that are selling food grains, cloth, and general merchandise. Temporary shops spring up at the fair and cater to the needs of the visitors. Lots of Rajasthan handicrafts are sold in this fair.

Chandangaon is located at 176 km from Jaipur Rajasthan. 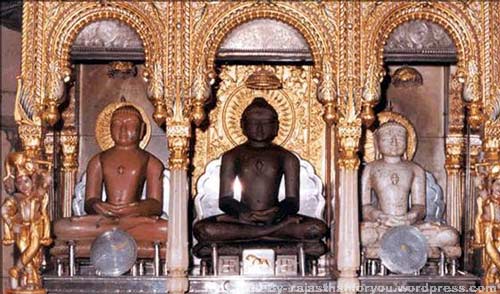