Like other festivals, Ganesha Chaturthi is also celebrated in Rajasthan with great joy and devotion. This festival is celebrated after Lord Ganesha. Lord Ganesha is the eldest son of Lord Shiva and Goddess Parvati and an elder brother named Kartikeya with a vehicle or vahana of a peacock.

Lord Ganesha has his vehicle or vahana a small mouse. He is the Lord who is believed to remove all obstacles on the path of the spiritual aspirant and bestows upon him worldly as well as spiritual success. He is the Lord of Harmony and Peace.

In Rajasthan, on the occasion of Ganesh Chaturthi, an image of Ganesh is covered in red kumkum and a garland of red flowers is put on the Ganesha idol, then the idol is placed by many households right outside their entry gates.

A small puja thali, with haldi and kumkum, is also placed at the entrance so that the visiting people take a pinch of each and put it on their foreheads and throat as it is believed to be auspicious.

Motichoor Ladoos are usually made in the house, to be first offered to Lord Ganesha as it is believed as his favorite and then distributed as prasad to the devotees.

In Rajasthan, the most popular Ganesha temple is situated in Ranthambore and the temple dedicated to Lord Ganesha is located in the fort of Ranthambhore, which is about 12 kms from Sawai Madhopur and is one of the most important Ganesha temples in the State.

There is always a lot of activity at the temple because people believe that the first invitation to a marriage should be sent to Lord Ganesha as it would put all the obstacles away from the couple’s life.

This temple is the site for Ganesh Chaturthi celebrations attracting devotees from all over to join in the singing of devotional songs. The orange color in which the idol is painted has also become the holy color for this festival.

The idol is lavishly decorated with gold ornaments and every day joys with huge garlands of marigold. 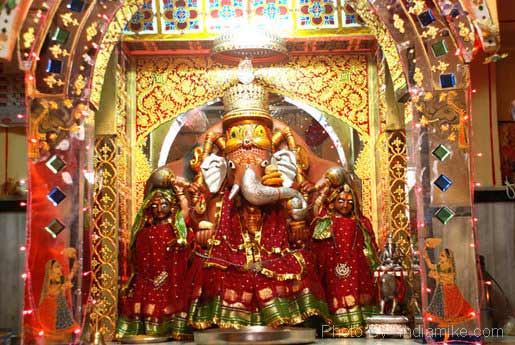