Holi is a fun-filled and energetic festival which is celebrated on the full moon day of the Phalgun month of the Hindu calendar celebrated in March. The celebration begins with the lightening of a bonfire on Holi eve known as Holika Dahan.

On the very next day, people in large groups come out of their houses, and put colors on each other known as ‘gulal’. They also pour colorful waters on each other using balloons and color sprays.

Holi is a day to forget past complaints and meet the others with great warmth and high spirit.

On Dulhendi or Holi celebrations people of Rajasthan get energized with joy and fun. They perform various folk dances of the state like Ghoomer and Gait. Ghoomer is a traditional dance form of Rajasthan.

It is a women’s folk dance, developed by the Bhil tribe and later on adopted by the Rajputs. This form of dance is performed by groups of women in spinning robes, who are accompanied by both male and female chorus singers.

Gait is another dance done on the occasion of Holi. This form of dance is usually performed by men. Gait is known by different names in different regions such as Dandia Gair in Rajasthan and Grandad in the Shekhawati region.

This is another form of dance, which is somewhat related to Ghoomar. Also developed by the Bhil tribe, this dance is performed by both men and women, mainly during the festival of Holi.

Children enjoy throwing the water balloons to the passersby.

On Holi the entire country comes out a festive look during the festival, the market is at thrill during the Holi festival. There are various Holi hues with gulals and abeers on the roadside on the day before the festival.

Pichkaris is the modern design that is used to drench the person in the town.

The women or the housewives in Rajasthan at home prepares the special dishes that are generally prepared at the time of Holi like gujiyas, mathari, Dahi Bhalla, thandai and papri for the family members and relatives.

At some places, people also prepare papads and potato chips at this time. The spirit of color makes put the whole country in trance. 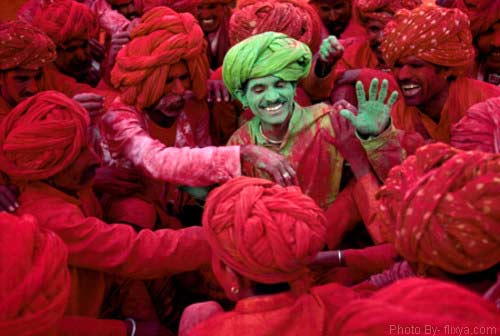 Villagers participating in the Holi Festival in Rajasthan