Raksha Bandhan, which is known as the sacred the bond of protection between brother and sister is celebrated with great enthusiasm in Rajasthan.

Rakhi is a Hindu festival primarily observed in India and especially in Rajasthan, which celebrates the relationship between brothers, cousins, and sisters. It is also called Rakhi Purnima in most of India.

The purpose of this thread is to denote the sister’s prayers and wishes for her brother’s wellbeing and good fortune for future times. These threads come in many colors and designs.

The brother traditionally gives the sister a present in return which can be money or other presents. The siblings also traditionally feed each other sweets during this occasion.

In Rajasthan, women make Rakhis for their brothers as well as sisters whereas in most of the places in India it is sold in markets.

Rani Karnavati, who was the widow of King of Chittor, sent the holy thread known as Rakhi to Emperor Humayun when she felt that there was no hope of defending the kingdom of Chittor from the attack of Emperor of Gujarat, Bahadur Shah.

Emperor Humayun accepted the Rakhi and started with his troops to defend her but before he reached Chittorgarh fort, the war was over and the kingdom was captured. Queen Karnavati committed suicide with a large number of women by consuming poison.

On the occasion of Raksha, Bandhan sisters make delicious items for their brother like sweets and other favorite delicacies Brothers are also bound to gift their sisters and promise them protection from all obstacles and difficulties of life.

It is not that Rakhi can be tied between the family members or among the relatives but anybody feels like bonding a relation of brother and sister then they can tie Rakhi as this festival is above religion, caste and creed and this message of selfless love has been spread from Rajasthan to the country. 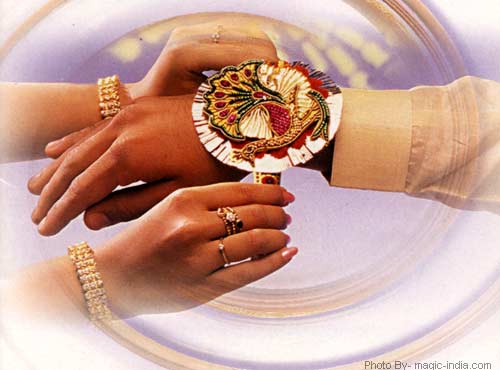