Gogaji is a local deity which is very popular in the northern states of India but it is more popular in Rajasthan compared to others. Gogaji is a folk deity and also known with other name of Jahar Veer Gogga and the deity is having temples in other states like Uttarakhand, Punjab, Uttar Pradesh, and Haryana. The temple is 950 years old. It was prepared and renovated by the Maharaja of Bikaner Shri Ganga Singhji in the year 1911. The temple was established to commemorate Shri Gogaji the local deity whose influence over the people is very intense. The personality of Gogaji is believed to be a blessing by Guru Gorakhnath to his mother Bachchal. And the blessing was came through a fruit of Guggal and he was named as Gogaji because of his birth from the Gugal Fruit and the local people call him with respect and also greet him because he spend his life on serving the cows. Gogaji was born to a Chauhan Rajput King and his mother was from Tuar community and she was blessed by Guru Gorakhnath as gave birth to the son named Goga. Gogaji was also known as ‘Jahar Vir’ or the snake king and is worshipped in many states of India such as Punjab, Uttarakhand, Maharashtra, Himachal Pradesh, Jammu and Kashmir and Gujarat. He is also worshipped by the Bachchal Rajputs which is believed to be his maternal side.

Gogaji was born to the Chauhan King Zewar and Queen Bachchal in the Churu district of Rajasthan. He spent his childhood at the same place and his birth time is believed to be around 900 AD.

According to the ancient tales, it is believed that while queen Bachchal was worshipping her Guru Gorakhnath; while her twin sister who was jealous of her take over the blessings from the Guru and she cheated him by wearing her clothes and took over the Gugal fruit which was blessed.

When queen Bachchal came over she found that she was cheated and she rushed to her Guru asking him for the blessings and Guru said that he has already given his blessing and her sister is cheating her.

Queen Bachchal requested and pleaded to the guru that eventually get her two gugal candies and she distributed these candies to two pregnant ladies and also gave to the stallion who was pregnant at that time.

After consuming the candies she was blessed with a son and according to the Guru’s blessing the so would grow up to a very powerful king and he became so.

Gogaji became a local God to the people of Rajasthan and worshipped as Devta (God) and he is having a separate temple and he is worshiped because people think that he will is the saver from snakes and its poison and also from other evils too.

Gogaji is a renowned and one of the most respected local deities for the people of Rajasthan and he also has a temple which is known as ‘Than’.

Fairs and festivals in Gogaji

Usually, the temple is visited by a huge number of devotees every day but on the 9th day of the Bhadra month( August-September) people visit in hundred to pay homage to God. The custom includes painting a black snake on the wall of the temple and different types of sweet dishes are made to make God happy and they are distributed as Prasad. The prasa include churma which is a local sweet of rajasthan and the devotees also make MIthi Poori or sweet chapattis and many other kinds of sweets.

There is a huge fair organized every year in honor of Gogaji which is visited by thousands of people every year and this fair is a grand event organized by the local people and the Mandir Samiti and the fair lasts for 3 day starting from 9th to 11th day of the month. The fair include a wide range stalls selling food and local artifacts of Rajasthan and people sing bhajans of Gogaji and dance to the beats of drums and celebrate at the birthplace and Samadhi. People generally seen putting snakes around their neck and dance to the tunes. 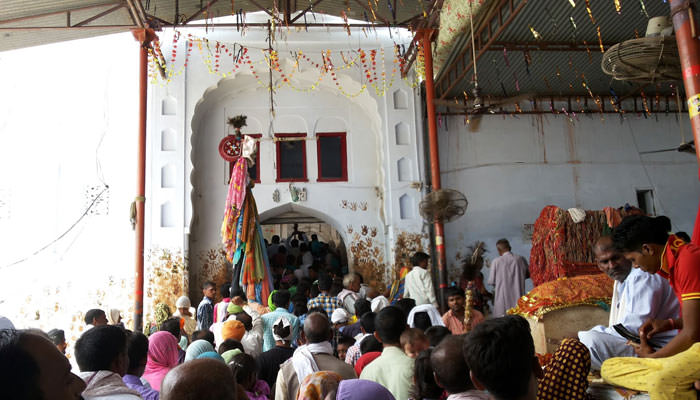